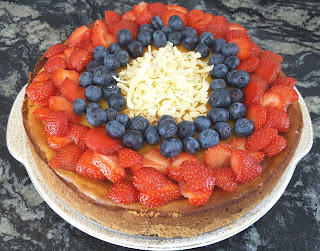 I made this cheesecake for the 4th of July this year. It was a fun way to help celebrate our most American of holidays while living in Ireland for the summer. You can top this cheesecake any way you like or is also delicious plain. I topped with fresh strawberries, blueberries and shaved white chocolate for our festive holiday celebration.

The recipe is from All Recipes. 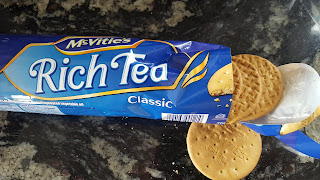 Preparation:
Preheat oven to 350. Lightly grease bottom and sides of 9" springform pan. I used my hands to crush the Rich Tea Biscuits. Mix Biscuits (or Graham Crackers) with 3 Tbsp. melted butter until evenly moistened. Press the buttered crumb mixture into bottom and 1/2 inch up the sides of springform pan. Put in fridge to chill while making the filling.

Whisk flour into the creme fraiche or sour cream. Add vanilla. Whisk in cream cheese, 8 oz. at a time. Add sugar and whisk until thoroughly combined (3 - 5 minutes) and shiny. I am sure you could do this with either a hand or standing mixer, but I have neither here in Spiddal so the whisk worked well and also provided some good upper body exercise! 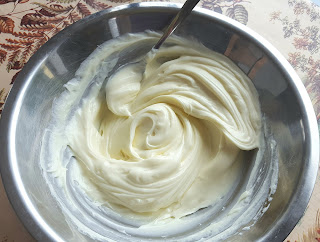 Whisk in eggs, one at a time, mixing well after each addition. Stir in lemon and orange zest.

Gently spoon filling into pan. Bake in preheated oven until edges are nicely puffed and the surface of the cheesecake is firm except for a small spot in the center that will jiggle when pan is gently shaken. This will take about 1 hour.

When done, turn off oven and leave cheesecake in oven to cool for about 1 hour. This prevents cracking. I learned another neat way to prevent cracking from Chef Jane St. Pierre at the cooking class I went to with my brother at Stonewall Kitchen in York, Maine. Jane says check the cheesecake temperature just before you think it's done. Insert thermometer in the center of the cake. If it registers 160 degrees, it's done! No cracks! Cool completely before topping.


I made this cheesecake again when our good friends Brendan and Mary O'Tuairisg came to dinner with their ever so cool daughter, Roisin. Our son, Mike was here visiting, too, which made for a very festive night! This time I made a strawberry topping by combining 2 cups of freshly sliced strawberries with a cup of Follain's Strawberry Jam. 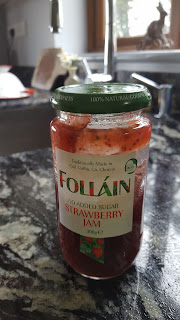 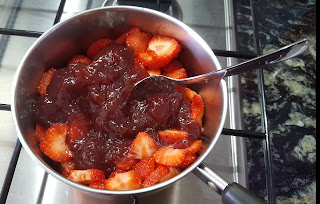 I LOVE CHEESECAKE AND IF YOU FLIP THROUGH PREVIOUS BLOGS YOU'LL SEE I MAKE A LOT OF IT!

ALL FOR TODAY. OUR TIME IN IRELAND IS NEARING AN END, BUT WE'LL BE BACK AGAIN SOON TO CELEBRATE MORE OF THE CHARMING IRISH WAYS.

TUNE IN AGAIN SOON FOR ANOTHER EPISODE OF: This is our Irish home sweet home!
Posted by Cindy Rabbitt at 10:59 AM No comments: 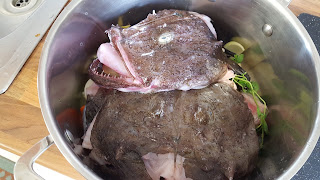 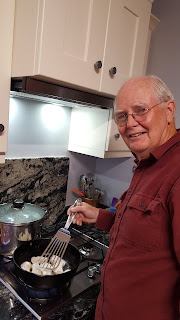 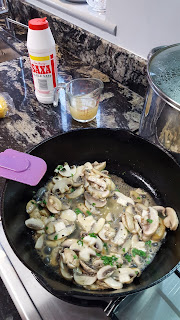 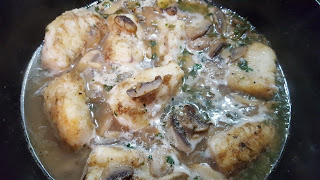 Posted by Cindy Rabbitt at 11:13 AM No comments:

THE ATAULFO MANGOES ORIGINATED IN MEXICO.

Mangoes were first grown in India over 5000 years ago and are considerered a sacred fruit in that country. They are now grown throughout the world in warm climes.