CHICKEN CORDON BLEU WITH A TWIST!

I may have no right to call this dish Chicken Cordon Bleu, but there are so many different variations that I am taking the liberty to do so.
Turns out Chicken Cordon Bleu did not originate in France, as I have always thought, but in Switzerald around the 1940's, although as with much food history disagreement abounds. From what I've learned it has nothing to do with the famous Cordon Bleu cooking school in Paris, however top chefs are awarded a Cordon Bleu (Blue Ribbon) for their excellence and high standard of cooking. The term Cordon Bleu relates to a special order of French Knights. Originally these Knights wore a wide blue ribbon designating them as the highest order of knighthood instituted by Henri III of France in 1578. Wouldn't this lead you to believe this is a classical French dish? Many regional dishes throughout Europe share the characteristics of Chicken Cordon Bleu--namely chicken, veal or pork (think snitzel) wrapped around meat (generally ham) and cheese. In Switzerland this, of course, is Swiss or Gruyere cheese. In some cases the filet is breaded and deep fried or simply baked. Here is my version.

CHICKEN CORDON BLEU
Ingredients:
4 chicken breasts, pounded evenly to just under 1/2 inch
4 Tbsp. Mayonnaise, 1 Tbsp. per breast
4 tsp. nice, grainy mustard, 1 per breast
10 oz. Bag fresh spinach, wilted
4 slices good quality Italian salami  per breast
Enough cheese to cover filling. I used an Irish cheese called Wensleydale that is infused with  cranberies.
Salt/Pepper
4 sprigs fresh rosemary
Olive oil to coat breasts once they are stuffed and rolled. This technique is known as a roulade. The term roulade is French meaning rolled and stuffed and is used for both sweet and savory dishes. 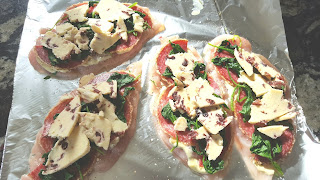 Preparation:
Preheat oven to 375. Rinse spinach thoroughly. Heat a large pot and drop in spinach. The moisture from the rinsing is all you'll need to just wilt spinach, about 2 minutes. Allow to cool and squeeze out any moisture if necessary.  Evenly pound chicken breasts until they are just under 1/2 inch thick. Liberally salt and pepper both sides of the chicken. Lay breasts flat with inside up. Spread each filet with 1 Tbsp. Mayo and 1 tsp. Mustard. This keeps the chicken super moist. Lay 4 slices of Italian salami on each breast. Top with wilted spinach and generous amount of cheese. One of my husband's favorite cheeses is Wensleydale with cranberries. This cheese was originally made in Wensleydale, North Yorkshire by an order of Cistercian monks as far back as 1150. It's a mild cheese and the cranberries lend a delicious sweet/salty combination of flavors. Originally made with sheep's milk, it is now made throughout the UK and Ireland with either sheep or cows milk. This version is from cows milk.

Roll each breast from the long side using your fingers to keep pulling stuffing inside as it tends to slip as you roll. Lightly oil a piece of foil and lay breasts, seem side down in a baking pan. 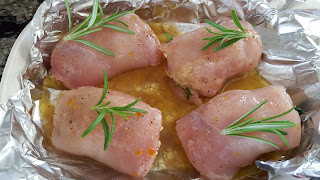 Top each roulade with a little olive oil and a sprig of rosemary. Place in preheated oven and bake for about 35 minutes. More time may be needed if your chicken breasts are very large. I have become a big fan of testing with a meat thermometer. 165 degrees means you are done! 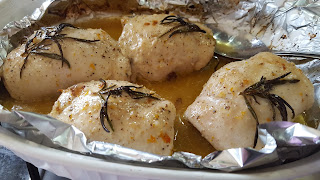 Let the chicken cool for about 10 minutes. I decided to cut into thick slices and lay on a bed of greens with lightly steamed peapods and pickled beets.
All for today.
Tomorrow we embark on an epic journey
throughout the Baltic Sea. Can't wait to
taste treats from Copenhagen, Stockholm,
Helsinki, St. Petersburg, Warnemunde Germany, Tallin Estonia AND Oslo!

Posted by Cindy Rabbitt at 9:34 AM No comments:

I found this recipe on the Simply Recipes site and it is by far the best and easiest Banana Bread I have ever made. Very moist and flavorful and comes together in minutes, and all in one bowl! On their site they claim it is their most popular recipe for over 10 years. No mixer required, which is good since I don't own one here in Spiddal, although that may soon change. I have my eye on a beautiful standing mixer in Galway. But back to the recipe... 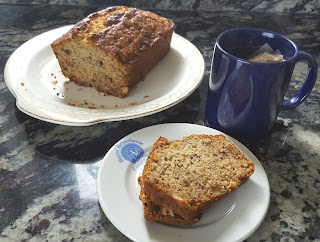 Preparation:
Preheat oven to 350 degrees F/175C. Add butter to a 4x8 inch loaf pan and melt the butter in the oven. In a mixing bowl, mash the ripe bananas with a fork until completely smooth. Stir the melted butter into the mashed bananas. Mix in baking soda and salt. Stir in sugar. Push this mixture to one side of the bowl. Add the egg and beat lightly. Mix beaten egg with other ingredients. Add vanilla and finally mix in flour. The original recipe does not call for nuts, but I added 1 cup chopped walnuts. Add them now, if using.

Liberally butter your baking pan and add the batter. I also topped the batter with about 2 Tbsp. of Demerara brown sugar and a healthy sprinkling of cinnamon, which the original recipe did not call for.

Bake for 50 to 60 minutes until top is golden brown and inserted toothpick comes out clean. Remove from the oven and cool in pan on a rack for 15 minutes. 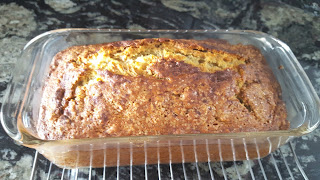 Then remove bread from the pan and let it cool completely before slicing. 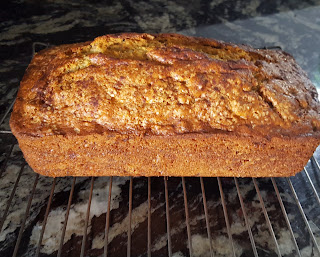 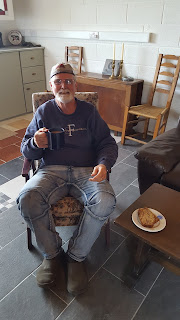 I HOPE YOU ENJOY THIS BANANA BREAD
RECIPE AS MUCH AS MY HUSBAND,
JERRY, AND I DID!

TUNE IN AGAIN SOON
FOR ANOTHER EPISODE OF...

Posted by Cindy Rabbitt at 10:10 AM No comments:

My new Wild Atlantic Way cookbook inspired me to create this recipe. 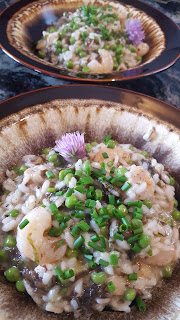 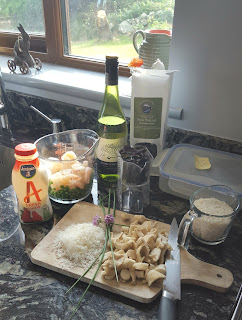 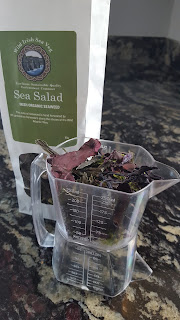 Preparation:
In a large saucepan heat chicken stock to a boil then reduce to simmer. In a separate medium size saucepan melt butter. Add risotto and stir to thoroughly coat the rice. Keep heat on lowest simmer. Add salt/pepper. Add mushrooms and stir to coat them with butter, as well. Add chicken stock to rice one ladle at a time stirring rice constantly until all liquid is absorbed before adding additional stock. About 3 ladles into this process add 1/2 cup white wine. Stir until wine is absorbed. Continue adding stock one ladle at a time for 15 minutes until rice just begins to soften.  You may not need all 6 cups of stock. Add prawns, peas and seaweed and continue stirring, adding stock as necessary for another 5-10 minutes until desired risotto consistency is reached. Finish by adding 1/4 cup grated parmesan and 1/4 cup half and half or cream. Continuing stirring for 2 more minutes. Serve garnished with chives. I also added a chive blossom for color.

This is the wine I used in the Risotto. Porcupine Ridge is a bright, citrusy Sauvignon Blanc from South Africa. The cook enjoyed a glass, too! 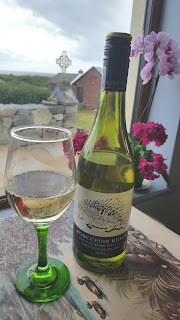 There is nothing tricky about making Risotto. Just remember to keep stirring and also to keep the chicken stock simmering the whole time.


THAT'S ALL FOR TODAY
FROM THE BLUSTERY IRISH COAST!

Posted by Cindy Rabbitt at 5:09 AM No comments: 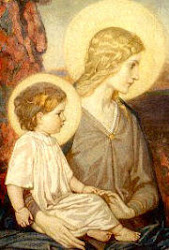