I love birthdays and I love cooking special occasion food and most of all I love to please people with food so this year's birthday celebration for my husband was an eating extravaganza!

BLUEBERRY STUFFED FRENCH TOAST
You know I like "do-ahead" food. This breakfast treat is put together the night before and then baked next morning. It was rich and delicious and would make a fantastic holiday breakfast. I cut the recipe in half and it was still huge. I am going to give you the full recipe. The recipe calls for baking in a 9x13 pan which would have been much better than the deep dish I used. It cooked without a problem, but did not look that attractive when served. If you use the 9x13 pan you can cut into squares. I dusted the top with cinnamon before refrigerating overnight. The recipe did not call for it, but I think cinnamon and blueberries are a natural pairing.
Ingredients:
12 slices day-old bread, cut into 1" cubes (I made a special oat bread for the occasion so cut 6 slices into cubes since I was halving.)
2 (8 oz.) packages cream cheese, cut into 1" cubes (I used Neufchatel.)
1 cup fresh blueberries (I used a cup even though I was cutting in half.)
12 eggs, beaten
2 cups milk
1 tsp. vanilla extract
1/3 cup maple syrup

Preparation:
Lightly grease a 9x13" baking dish. Arrange half the bread cubes in the dish, and top with cream cheese cubes. 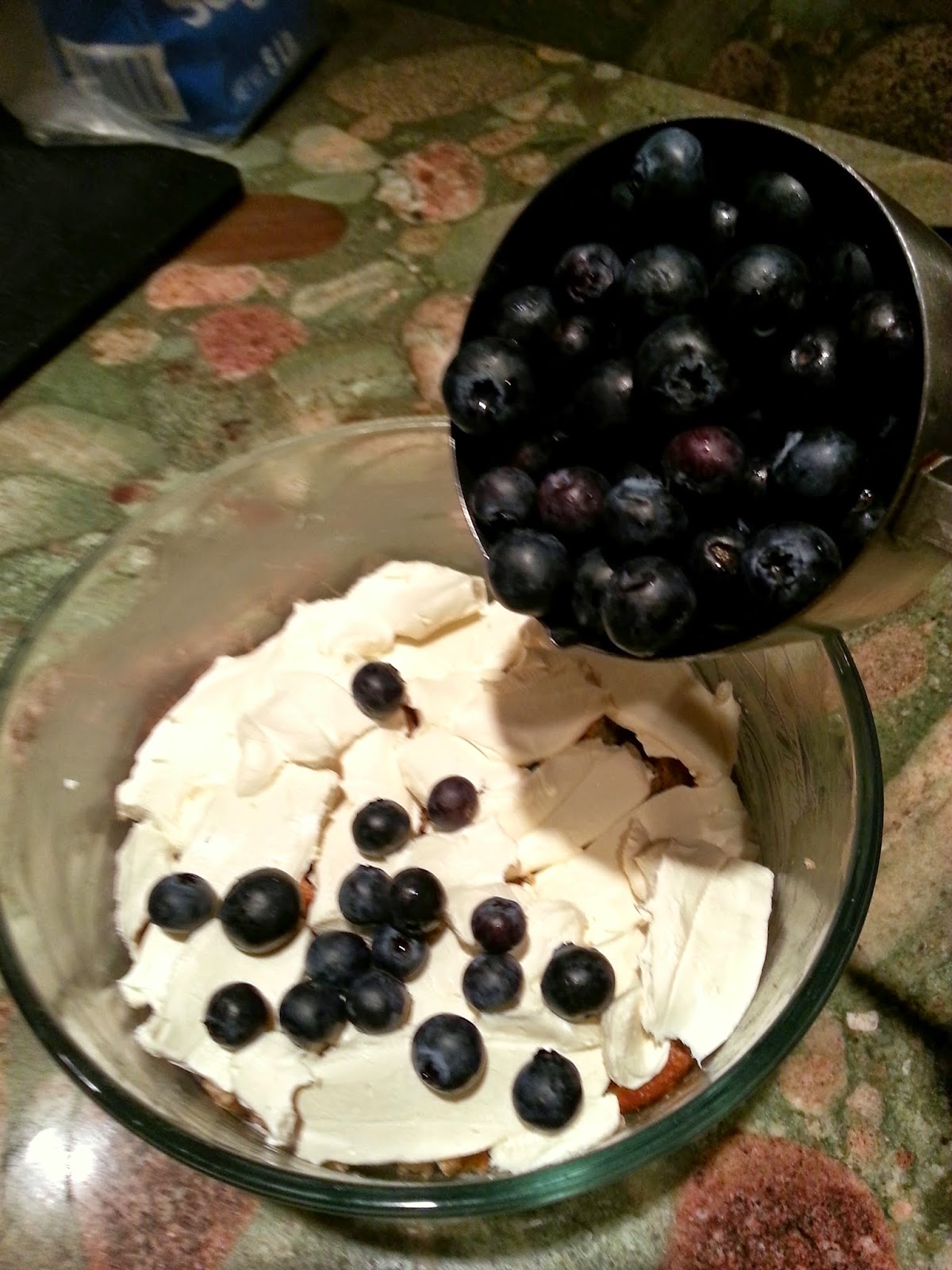 Sprinkle 1 cup blueberries over the cream cheese and top with remaining bread cubes.
In a large bowl, mix the eggs, milk, vanilla, and syrup. Pour over the bread cubes. Cover and refrigerate overnight.
Remove the bread cube mixture form the fridge for about 30 minutes before baking. Preheat oven to 350 degrees. Cover and bake 30 minutes. Uncover and continue baking 25-30 minutes until center is firm and surface is slightly browned. You can test done-ness the way you would a custard by inserting a knife in the center. If it comes out clean, it is done. 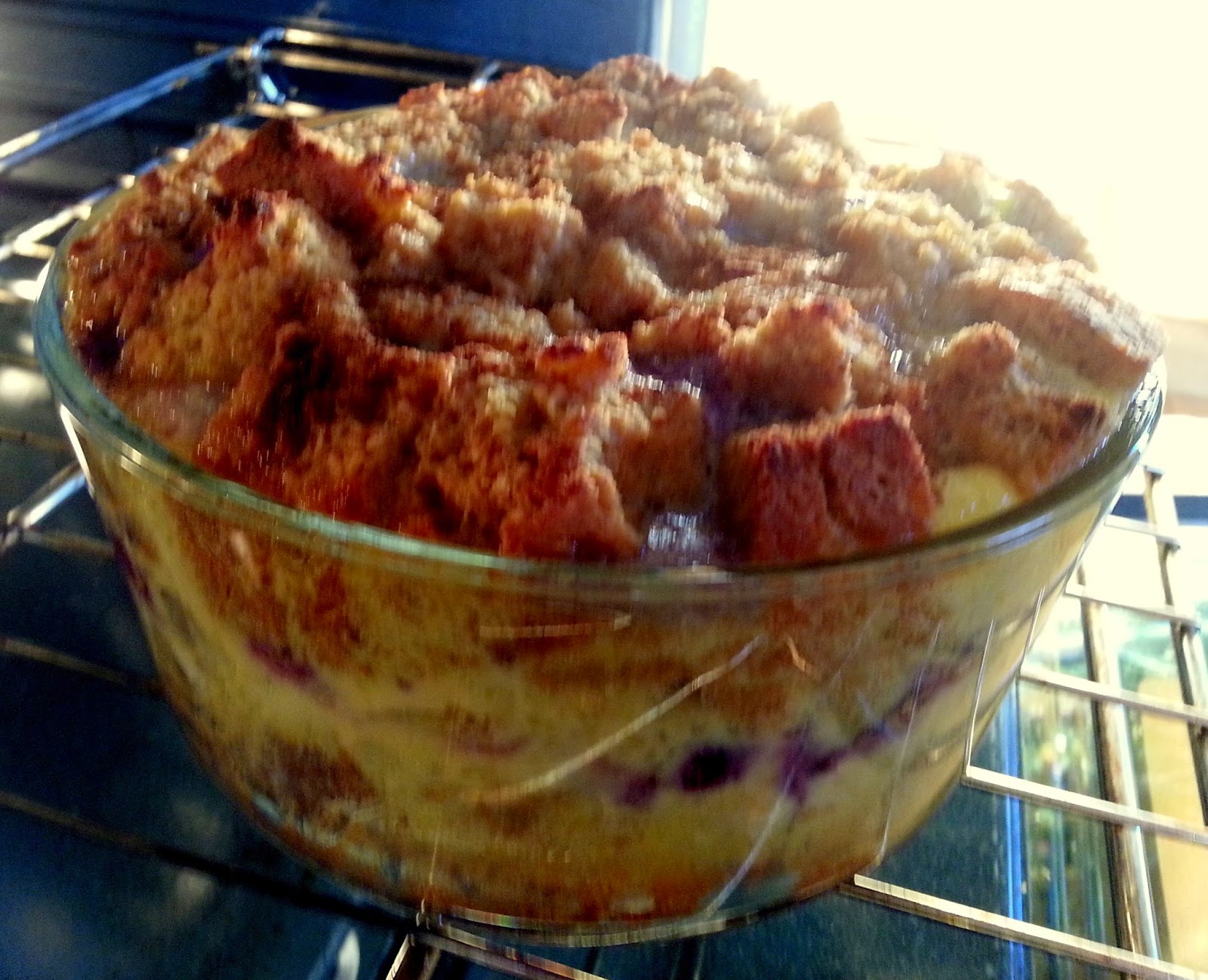 To make the blueberry syrup: In a medium saucepan mix the sugar, cornstarch and water. Bring to a boil. Stirring constantly cook 3-4 minutes until the blueberries burst. Stir in the butter and pour over the baked French Toast. This is more like a bread pudding than a stuffed French Toast, but really very yummy! I served with crispy bacon.

We did lunch out (KKaties Burgers in downtown Plymouth--not an ordinary burger! http://www.kkaties.com/burgers.html) , but for dinner I made Jerry... 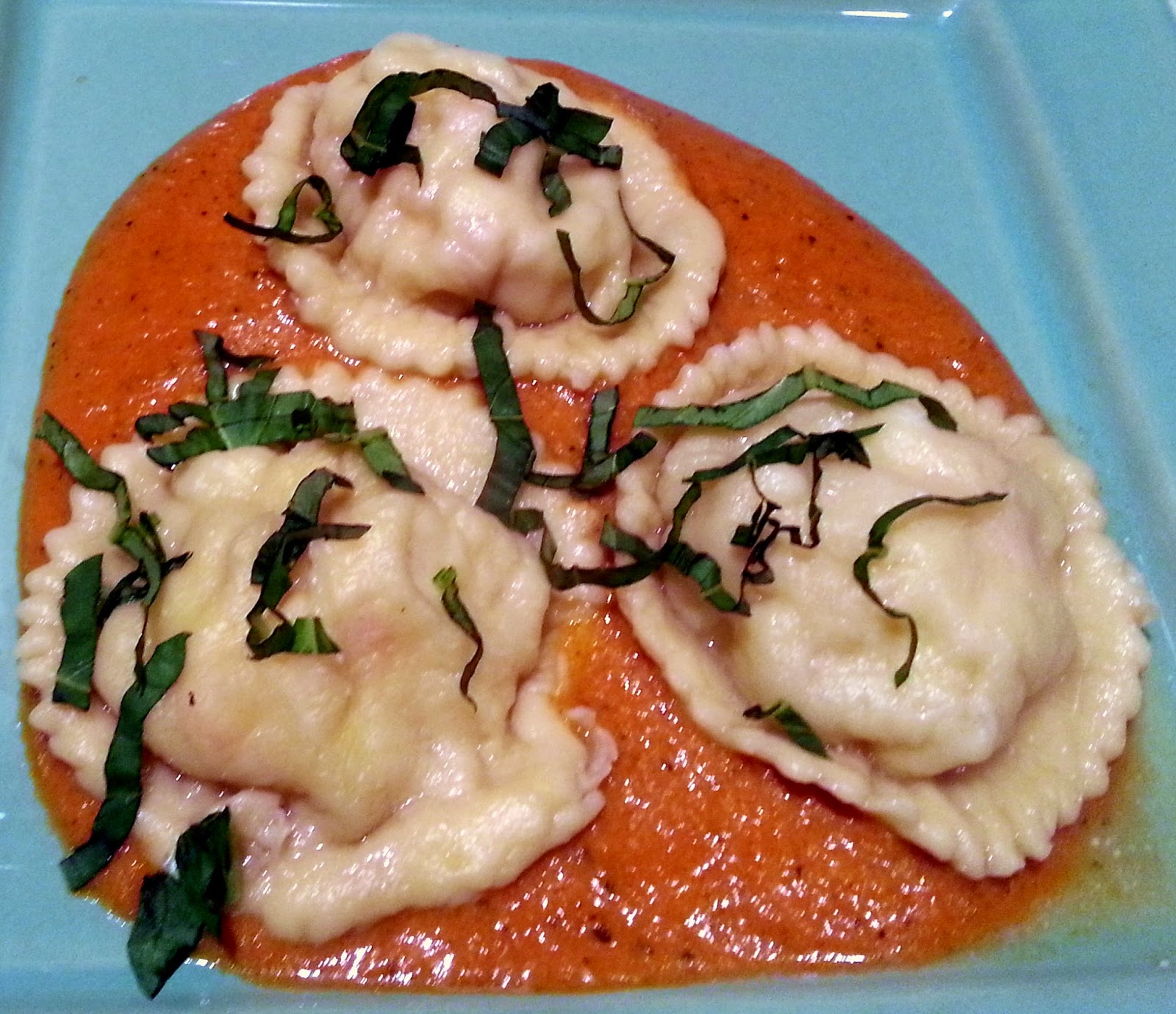 Ingredients:
LOBSTER CREAM SAUCE-
2 oz. unsalted butter
1 clove garlic, chopped
1 Tbsp. finely chopped shallots (Or use onions if you don't have shallots on hand.)
1 cup cooked lobster cut into chunks (I used two 1 1/4 lb. chix which was enough for both filling and sauce.)*
2 oz. Dry cream sherry (For cooking I like to use Fairbanks Medium-Dry California sherry. It's not bad for sipping either!)
Salt/Pepper
Pinch of hot pepper
1 Tbsp. chopped Basil
1 cup heavy cream (I used Half and Half.)
5 oz. tomato paste
Lobster broth (from the cooked lobsters) to thin the sauce as needed.

* I cooked and shelled the lobsters the night before which made assembly a little smoother, but this still is a dish with lots of steps.

Preparation:
For the lobster sauce: In a large saute pan, add the butter and melt. Add garlic and shallots and saute until golden brown. Add tomato paste, cream, seasoning and simmer gently for about 30 minutes. Add lobster and basil and saute 5 minutes. Add sherry and reduce for 2 minutes. The long, slow cooking will thicken the sauce and deepen the flavors. Thin it with the lobster broth if it gets too thick. Remove from heat and cool. Blend the sauce to make very smooth.

Finely chop the rest of the cooked lobster. In a large bowl, combine lobster and ricotta and mix well. Splash in a little sherry, salt and pepper.

Lay out the first piece of pasta dough and place a heaping tablespoon of stuffing 2 inches apart. My complaint about Lobster Ravioli in a restaurant...they never use enough lobster. Using a pastry brush, brush egg white around each bit of stuffing making the dough moist, but not wet. Take the second piece of pasta and cover the bottom piece with the stuffing. Press around each ravioli being careful not to squeeze the stuffing out. Using a round ravioli cutter, cut each ravioli round and put on a sheet pan sprinkled with semolina (semolina is flour made from Durum Wheat; excellent for making pasta-I like Bob's Red Mill)...or use fine corn meal or flour.

Notice I forgot to dust my tray with semolina...bad mistake. The raviolis stuck, but I was able to lift them up to cook without breaking. Nervous moment...!

Place ravioli in gently (gentle is key as these are delicate pastas) boiling water and cook for 8-10 minutes or until al dente. Reheat the lobster cream sauce and put a generous portion on each plate. Top the sauce with raviolis and basil. Enjoy!


ON TO DESSERT...MY HUSBAND'S FAVORITE PART OF ANY MEAL
This year Jerry requested a Boston Cream Pie which was one of his favorite desserts as a child. It really is more cake than pie, but I must say this was one of the best Boston Cream Pie's either of us has ever had. 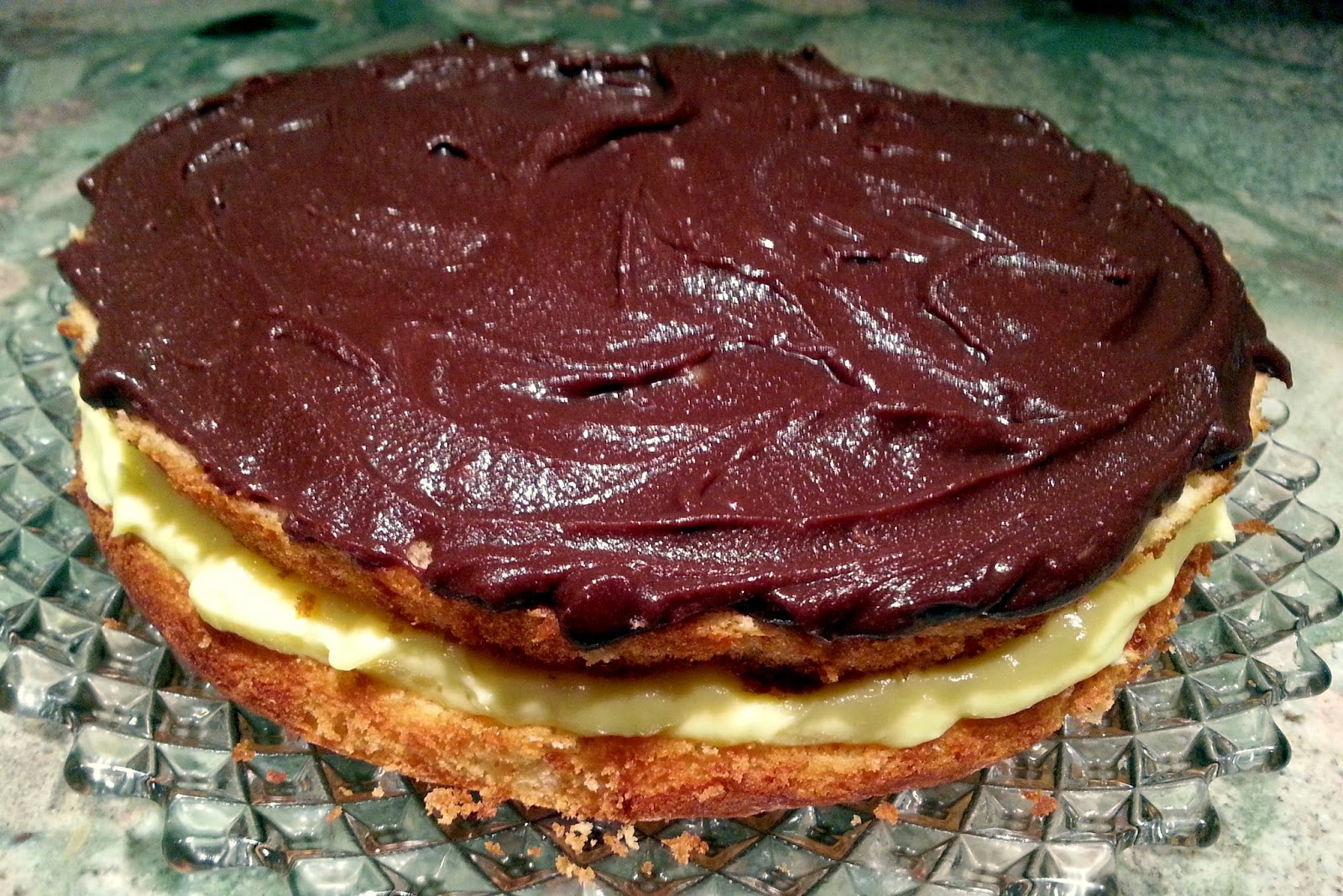 The Boston Cream Pie was originally a pie consisting of white cake with a custard filling or topping. That cake/pie had its origins in the early days of colonial history, and was sometimes called a Pudding-Cake Pie, although there have been references to a similar English custard cake, so its true origins probably hark back to Britain. If, in the early days, it included a raspberry jelly filling, it was called Mrs. Washington's Pie. In any case, this recipe is a WINNER! And, as some of you may know, the Boston Cream Pie is the OFFICIAL DESSERT OF MASSACHUSETTS!
BOSTON CREAM PIE

* I don't always, but this time did use cake flour and think it made a difference. 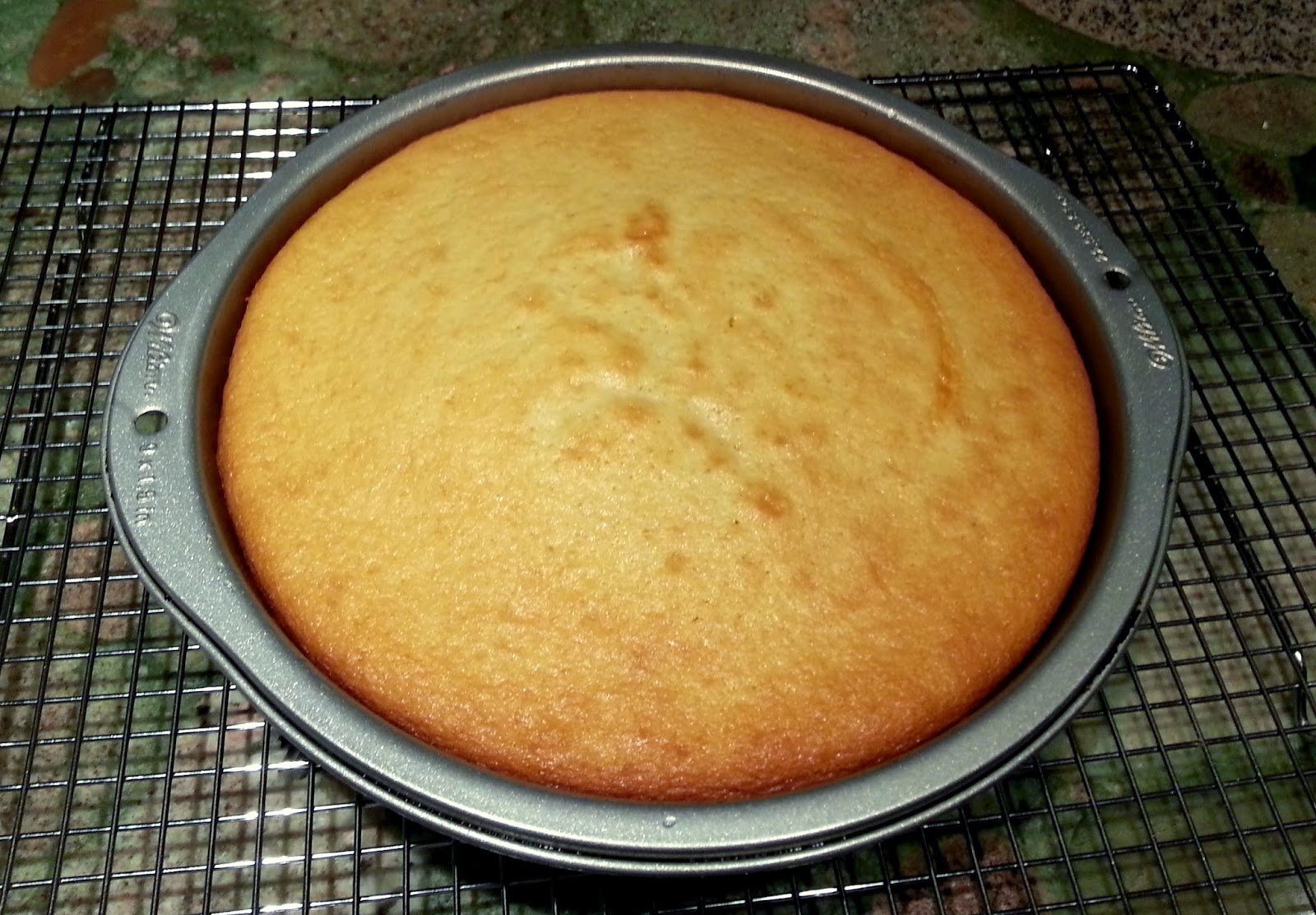 ** My neighbor, Karen makes the best chocolate ganache I have ever tasted. She and her husband were over for dinner recently and brought her famous ganache. I froze the leftovers so thawed for this occasion.

Preparation:
Preheat oven to 350 degrees. In a medium mixing bowl combine flour, sugar, baking powder, and salt. Make a well in the center of the flour mixture. Add milk, oil, egg yolks and vanilla. Beat with an electric mixer on low to medium speed until combined. Beat an additional 3 minutes on high speed and set aside.
In a large mixing bowl, beat egg whites and cream of tartar on medium to high speed until soft peaks form. Hint: Egg whites at room temperature whip faster than cold eggs. Pour the egg yolk/flour mixture over the egg white mixture and gently, but thoroughly fold together. Pour batter into a 9 inch greased pie pan. Bake for 25 to 30 minutes or until the top springs back when lightly touched. Invert the pan onto a wire rack. Cool completely. I made the cake the night before, kept covered on the counter.

Pastry Cream: In a medium saucepan, heat the milk and vanilla to a boil over medium heat. Immediately turn off the heat and set aside. Pull off the skin that has formed. In a bowl, whisk the 6 egg yolks and granulated sugar until light and fluffy. Add the cornstarch and whisk vigorously until no lumps remain. Whisk in 1/4 cup of the hot milk until incorporated. This step is important so your eggs don't get cooked when hit with the hot milk. Whisk the remaining hot milk mixture, reserving the empty saucepan.
Pour the mixture through a strainer back into the saucepan. Cook over medium-high heat, whisking constantly until thickened and slowly boiling. This is a great upper-body work-out! Remove from the heat and stir in the butter. Let cool slightly. Press a piece of plastic wrap directly on top of the Pastry Cream to prevent a skin from forming. Chill at least 2 hours, but this can also be made the night before. I made it first thing in the morning, but waited to assemble the cake until just before serving.

Ganache: In a medium bowl, pour the boiling cream over the chopped chocolate and stir until melted. OR in the Search Recipe Box (top left) type in Karen's Chocolate Ganache for a super, rich recipe.

To assemble the Boston Cream Pie: remove the cake from the pan. Cut the cake in half horizontally. Place the bottom layer on a serving plate and spread with the Pastry Cream. Top with second cake layer. Spread chocolate ganache over the top. It's OK if the chocolate drips down over the sides. Keep in refrigerator until ready to serve.
I have lots more food I want to talk about, but Thanksgiving is less than a week away so next time we will talk about some of the new treats I am going to include in our Thanksgiving feast, such as Oysters done 3 ways, Cranberry-Almond Biscotti's, and a Mile-High Apple Pie.


UNTIL THEN, AS ALWAYS...
HAVE FUN WITH YOUR FOOD!
RELAX AND ENJOY YOURSELF IN THE KITCHEN!

Posted by Cindy Rabbitt at 8:17 AM No comments: 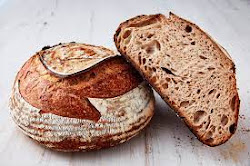 Sourdough is the oldest form of leavened bread used as early as ancient Egypt! Something that's been around that long has to be pretty good!