A Little This and That...

Tomorrow we are taking off for Eastern Europe for 3 weeks! This is a trip my husband and I have been planning and talking about for 22 years. I can't believe it is finally happening. I thought I would get one more post in before I leave as you won't hear from me again for awhile. I will be having a blast, but suffering from food-blog withdrawl. Hopefully I will take in lots of flavors and tastes and new treats to bring back to you.

A few weeks ago I made some hot pepper relish from peppers I grew in my little garden this year and it turned out pretty good so thought I would share it. What I liked about this relish was the blend of spicy hot pepper with a little sweet. It has lots of flavor and is easy to make. I have been making it just as the peppers ripen. Making one small batch at a time is much easier than dealing with a bushel of hot peppers. 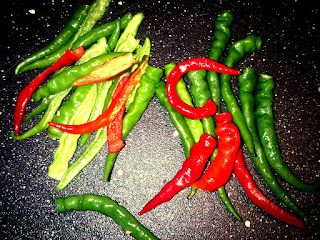 I used a combination of green and red cayenne peppers. You can also add a green, red, orange or yellow bell pepper to tone down the heat. 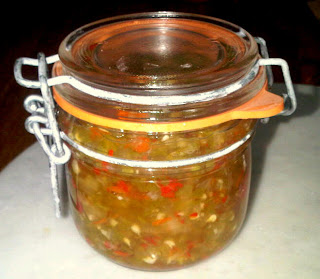 Preparation:
Seed and core the peppers. DO NOT RUB YOUR EYES while doing this or after. In fact, I recommend safety glasses. Seriously. I sliced one of these peppers in half and juice came back and hit me right in the eye-ball. It felt like my eye had been pierced with a hot needle. Not nice. I now wear my glasses when I make this hot relish. Put peppers, onion and garlic through a blender or mini-max and chop until quite fine. Be careful when removing the lid of the blender as the fumes really waft out.  Place pepper mixture in a saucepan and cover with water. Add 2 tsp. salt. Let stand for 10 minutes. Drain off water pressing on solids to get out as much water as possible.  Add 1 cup cider vinegar; 1/4 tsp. salt; sugar. Simmer peppers for 20 minutes. Ladle into jar(s) pressing down as you fill so liquid covers the peppers. Wipe jar rim and adjust lid. You can either process to store or keep in the refrigerator without processing for about a month. (I don't think this stuff could ever go bad.)  To process: Place in a boiling water "bath" for 15 minutes. Start the time once the water boils. I have already given several jars as gifts. Just make sure the recipient likes it "hot" before offering! 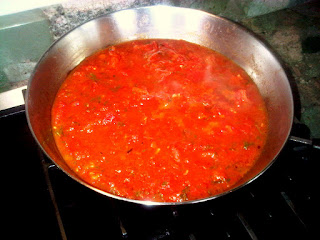 A few years ago we started doing the South Beach diet every January to lose some of that holiday weight and I found this recipe in South Beach which we use often.  We use many South Beach recipes throughout the year, but go 'hard-core' in January!

Portobella Pizzas can be filled with whatever topping you would select for pizza with crust; just use the mushroom AS the crust. Last week I decided to make homemade red sauce as my tomatoes are really coming into their own. The fresh tomatoes give the sauce a very bright flavor that is so much bigger than using canned tomatoes and canned paste, but they are not always available so using canned tomatoes are still far superior to store-bought jars of sauce.

Preparation:
Fill a large saute pan with salted water.  Bring to brisk boil.  Carefully drop the tomatoes into the boiling water to just barely blanche until their skins start to pop. As soon as you see one skin split, pour off into a collander as the others should follow. Let them sit until they are cool enough to handle. Peel the tomatoes. In the same large sauce pan, lightly saute the crushed garlic in olive oil; add the tomatoes and gently smash them with a wooden spoon or rubber spatula until they are flattened; add minced dried onions; herbs; salt/pepper; pinch of red pepper flake and let cook down until it is sauce-like consistency--about 2 hours. Stir every once in awhile and continue smooshing the tomatoes so they begin to disentegrate as the sauce cooks. I like sauce a little chunky, but if you prefer, you can blend the sauce to make perfectly smooth. This sauce also freezes very well.

For the Portobello Mushroom Pizza:
Wash mushrooms by brushing off the outer skin with your fingers or a pastry brush. Remove the stem and any black edges so you have a nice deep 'well' for your ingredients.  Add a layer of red sauce, and whatever toppings you like.  I used sauted sweet Italian sausage, thinly sliced yellow and green peppers, garlic, onion and topped with both mozarella and parmesan cheese.

Place on a flat pan and bake for about 20 minutes. If the cheese is not bubbly, put under the broiler for a minute or two. I serve 2 mushrooms per person, which sounds like a lot, but there are no carbs in this meal (except for the veggies). These "pizzas" can also be cooked on the grill.

WHEN DO HORS D'OEUVRES BECOME DINNER?
We recently had our new neighbors, Karen and Dave, over for cocktails. They were going out of town the next day so I wanted to make appetizers heavy enough to count as dinner so they would not have to go home and cook. This is what I did...

This is kind of a play on my Southwestern Chicken Thighs stuffed with avocado and wrapped in bacon that I talked about last time, but it is done as a 'bite' so makes a great appetizer.  It does not really need a recipe.  Clean a bunch of chicken thighs and cut into 1 1/2 inch chucks.  I planned 3 'bites' per person/1 'bite' per skewer.  Marinate the chicken bites in olive oil, freshly chopped garlic, salt, pepper for a couple hours or all afternoon. Cut thickly sliced bacon in quarters by cutting in half lengthwise and widthwise. Stretch it out a bit and wrap 1/4 piece of bacon around each chicken thigh. Soak the wooden skewers for a couple hours in water. Skewer the chicken by piercing both sides of the bacon to keep the bacon intact around the chicken 'bite'.

Make the avocado crema (previous blog so go to the Search Engine, top left on the actual website: www.cookwithcindy.com and search for Avocado Crema and it will take you right to the recipe-I use it myself!). The only difference is with these appetizers I topped the crema with crumbled bacon.

I wanted to grill these kabobs, but it was pouring so I got the broiler hot and grilled inside under the broiler, about 5 minutes each side until bacon was super crispy.  When broiling inside you just have to be careful not to catch your skewers on fire! 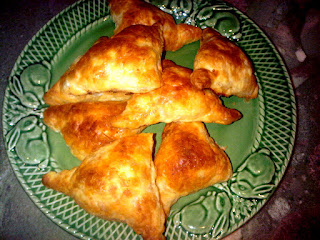 This is my take on Crab Rangoons, but they are not deep fried and as the name implies made with shrimp; not crab. Of all the apps I served that night, these were by far my favorite.

1/2 package puff pastry makes 9 rangoons. I planned 2 per person so I had one left over to sample since we had 4 people at this party.

Preparation:
Preheat oven to 400 degrees. Shell and devein shrimp. Boil in a spicy broth. I used water to cover, 2 pieces fresh lemon grass, 2" chunk of fresh sliced and peeled ginger root; pinch of hot pepper flake; dried garlic; dried onion. Boil until the shrimp are just pink--3-4 minutes. You can boil your shrimp in any herb or spice you like, but this blend worked well. Let cool and then chop. Since I was making 8 for company, divide your portions appropriately so they fill puff pastry squares equally. 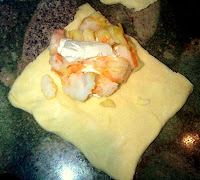 Flatten out each piece of puff pastry with a rolling pin or use your fingers. Place a piece of cream cheese on the bottom of the pastry. Put the chopped shrimp on1/2 side of the pastry and top with another piece of cream cheese. Carefully fold the pocket over into a triangle and pinch edges together. I think the beauty of this appetizer is its simplicity.  I would prefer a bit more heat, but was not sure how the crowd would react. You can goop it up with all kinds of things and it would probably be just as delicious, if not more! Experiment and let me know what you come up with!


Place the rangoons in preheated oven and bake for 25-30 minutes until golden brown on top.

I popped them under the broiler for 1 minute after they were baked to really brown up the tops and decided to serve with no sauce to keep them very simple. They were a big hit!

This hors'doeuvre echoed the shrimp served in the first hors d'oeuvre course. Here's how to make it...take 5 slices of smoked salmon (preferably wild salmon) and mash it with a fork. Add 1/2 pound cream cheese and mash it all together. Add 1 Tbsp. of capers and some black pepper. Top with finely chopped chives and let set for an hour or more to allow flavors to blend. To make the pita chips, cut pita pockets (I used whole grain pockets with flax--yum! yum!), into triangles. Spray with PAM and top with onion/garlic seasoning. Put under the broiler and crisp until browned--it just takes a couple minutes.

Next in our line-up of 'Hors'Douevres as a Meal' were Sausage Kabobs...what could be easier. 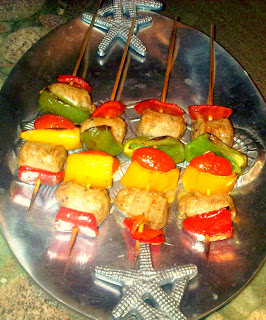 Cook all ingredients a little bit before you skewer. Use any combination, but I took green and yellow pepper, cherry tomatoes and sweet Italian sausage. Get a pan very hot with a little olive oil and drop in sausage stirring to release some fat, add peppers and cherry tomatoes. Cook for 2 minutes. Cool. Cut sausage into bite sized pieces and skewer with the veg. I had also planned to grill this, but New England weather did not allow, so I put under the broiler for about 4 minutes on each side and served. 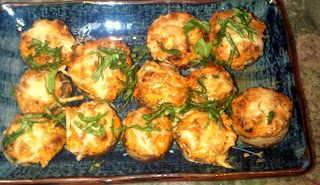 Preheat oven to 350 degrees. Clean and stem mushrooms. Coat the bottom of a baking dish with a little olive oil. Roll mushrooms around, both sides to coat with a little oil, sprinkle with salt/pepper. Fill each cap with a generous teaspoon of sun-dried tomato Boursin cheese. Bake for about 30 minutes until the cheese gets bubbly and the mushrooms look done. Top with some chopped basil.

I actuallly had more food than necessary (what a surprise!) and the neighbors left very satisfied!  The whole plan included fish, meat, veg, cheese, and of course a couple cocktails!--a complete dinner!! 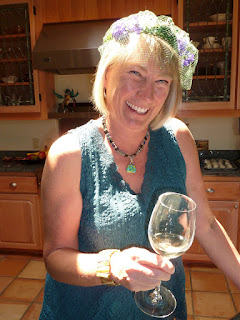 Thank you dear readers so sincerely for cooking with me once again.  I love talking about food and love cooking even more.

I am off on an adventure of a lifetime and look forward to sharing stories of lands I have never visited.  I don't think I will have much opportunity to cook, but sure do plan to eat!

Until next time, enjoy YOUR time in the kitchen, entertaining friends, family, and most of all being a complete free spirit when it comes to cooking!

Tune in again for another episode with: