Hopefully you are not all sick of turkey by now. Today I want to talk about a Cranberry Ginger Sauce I made for our Thanksgiving, a couple side dishes that could be served anytime, not just at Thanksgiving, and also the Boneless Stuffed Turkey Breast, which I believe stole the show! I made 2 boneless stuffed breasts and one 11 pound turkey for 5 of us. Really a a bit over-kill with all the other fixings, but it was all great fun and everyone enjoyed lots of left-overs! 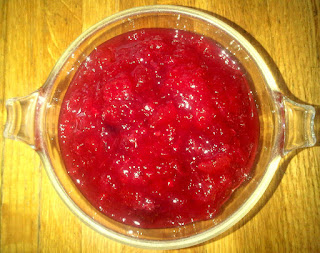 I like to change up the Cranberry Sauce every year sometimes using savory ingredients like shallots and sometimes going sweet with apple, pear, walnuts and maybe a little cinnamon. This year, because ginger is one of my Dad's favorite flavors I decided to try a Cranberry Ginger Sauce and it turned out very well. The fresh ginger root gave the sauce a spicy and exotic flavor. This recipe is fast and easy and can be made and stored in jars in the fridge a week in advance of your dinner.

Ingredients:
12 oz. fresh cranberries, washed and picked over (meaning take out any raw berries, or berries that have gone by & remove stems)
1(+) cup sugar (Toward the end of cooking time, taste it, if  you want it sweeter add more sugar.)
Finely minced fresh ginger root-about 2 Tbsp.
Juice of 1/2 orange (It's OK if some pulp falls in, too.)
Zest of 1/2 orange (Orange skin only. If you go too deep, the white part is bitter.)
1 cup water


Preparation:  Stir all ingredients together in a medium saucepan and bring to a boil over medium heat until sugar dissolves, stirring occasionally. Boil gently stirring frequently for 10-12 more minutes. Sauce will get thicker as it cools. Taste for sweetness. Add more sugar if you like. Cool in saucepan. Remove into glass jars and chill in fridge at least an hour if eating right away and if not, it is good for a week or more. This sauce gets more gingery as it sits!

Before I get into the Boneless Turkey Breast I want to tell you about a couple vegetable dishes that I prepared for Thanksgiving and may give you some ideas of your own.

CHEESEY DUCHESS POTATOES
Duchess or Duchesse Potatoes are a classic French dish. These pommes de terre are quite simple, but have an extraordinary texture. Traditionally to make Duchess Potatoes, season mashed potatoes well; beat in a well-beaten egg and then force through a pastry bag into puffy shapes and bake until golden brown. I simplify by cutting the "piping" step and just bake in a casserole.  To try something new, this time I added about a cup of sharp cheddar cheese and then topped with more cheese and butter before baking in a casserole. 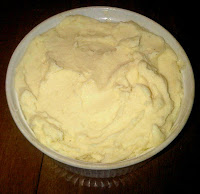 Unfortunately the photo of the potatoes all baked was too blurry, but trust me each one of those little peaks on top becomes golden brown and crispy with the inside texture being very creamy.  All you do is boil 4-5 big peeled and chopped potatoes (I used Idaho) in salted water. Mash potatoes with salt/pepper and about 1/2 stick butter. Add 1 cup of grated cheese of your choice. For Thanksgiving I used Cabot Cheddar. Add 1-2 eggs depending on size of eggs and how many potatoes you used. Beat the egg into the potato mixture. If you are making this the morning of your dinner, bring it to the counter to warm up for about an hour before baking. Bake at 350 degrees for 3/4 to 1 hour until top is very browned and beautiful! 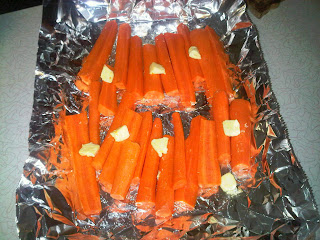 We also had Maple Glazed Carrots that were supposed to be served with crumbled buttered pecans, but the pecans burned to a crisp so I served the carrots sans nuts. To make this vegetable dish, peel and cut carrots into uniform, but fairly large pieces. Lay them out on a cookie sheet lined with foil. Liberally salt and pepper, add about 2 capfuls of Olive Oil, roll carrots around to coat in oil, and dot with butter. Roast in preheated 425 degree oven until tender and browned; 40-45 minutes. This can be done the night before. Wrap well and refrigerate overnight. To make the sauce melt about 2 Tbsp. butter in a pan, add 1/2 cup maple syrup and a pinch of hot pepper. Cut with a tablespoon or 2 of water if it seems too thick. I also added (optional) 1 Tbsp. of bourbon since that was the theme for the turkey basting! Toss the carrots in this sauce and rebake, covered, for about 20 minutes until nice and hot. 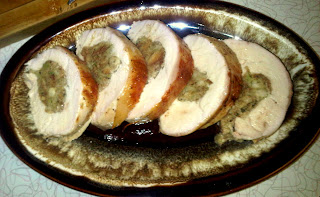 When serving do not put the end pieces of the rolled turkey on the plate as they are not as large as the center pieces so don't look as attractive, but they work well in sandwiches later!  Each breast made 5 thick slices, (plus the end-piece left-overs). I served the rolled turkey breast with a mushroom and caramelized shallot gravy. I used  a very traditional herby bread stuffing and used the same stuffing for both big bird and the 2 breasts. If I was cooking for more adventurous palates I would have used stuffing that included spinach, feta cheese, roasted red pepper, pine nuts, or something along those lines, but this year it was a bag of herbed bread crumbs (whatever brand has the least amount of salt; this year it was Pepperidge Farm). Melt 1 stick of butter, add 3 stalks of finely diced celery, finely diced large onion, cook both in the butter until soft. Add lots of Bell Seasoning. No salt! And a little pepper. Add the bag of herbed bread crumb; 1 egg; moisten with about a cup of chicken stock; mix well; cover with plastic wrap and let sit overnight. Add more chicken stock in the morning if the stuffing needs a little loosening.

Now on to a bit of technique for rolling.

I bought hotel style turkey breast which is a whole breast and some wing meat on the bone. To cut each breast off the bone run your sharpest big knife along either side of the backbone to loosen the meat at the top first and then just continue along the natural line of the bone/ribs keeping your knife close to the meat as you cut it away. Leave the skin on. You will be surprised how easy this is to remove the meat from the bone. Once off the bone, pound your breast to an even thickness--about 3/4 inch thick.  Remove any tendons, visible silver skin or other junk. 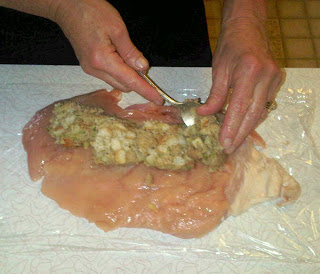 Once the breasts are flattened, place your stuffing down the center of the breast. Start rolling from the long end, jelly roll style.  As you roll, the stuffing may ooze out, but just keep gently working it back inside with your fingers. Pull the skin so it fits around the breast. Now you are ready for tying. 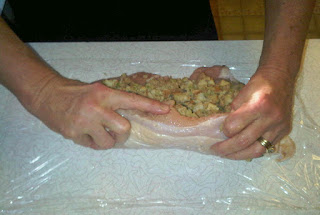 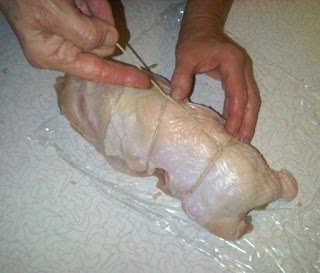 This is my favorite part as it makes me feel like a little butcher! Take a long piece of kitchen twine and start by sliding the twine under the breast and tying it off in a loop around the meat. Bring the string across the top of the breast and every 2 1/2 inches or so, loop the twine under the breast and just 'catch' the long piece under the loop at the top to make a secure, but loose knot. Keep doing this until you are at the end and then tie off in a tight knot and cut whatever left-over string you have. If you do not have kitchen twine, get creative! One night when cooking with friends we resorted to dental floss (unwaxed and non-minted of course) to tie up some chicken breasts. Worked just fine! 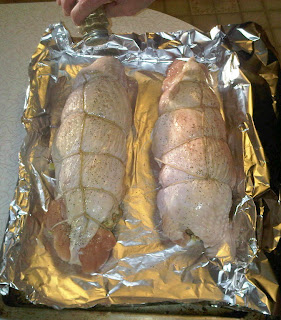 And here they are ready to roast. Because there are no bones it does not take long to cook these breasts even though stuffed. You do not want them to dry out. Drizzle them liberally with olive oil, salt, pepper and dot with butter. I roasted big bird in a bourbon sauce (Yum Yum was that ever good!) so used a little of this to baste as they were cooking. I started these breasts at 425 degrees for 15 minutes and then turned the oven down to 325 and cooked for another 45 minutes for an hour total cooking time. I know you are supposed to use a meat thermometer to test doneness, but I cannot find one that works well so I go by look and feel.

A quick word on big bird... 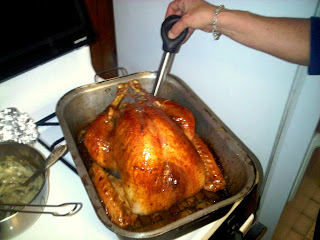 My husband told me this morning that if he never had another full bone-in turkey for Thanksgiving he would not be disappointed. That was quite a compliment on the boneless breasts, but I would be disappointed not to brine, stuff, roast, baste and carve a big bird. I just love doing it! This year I brined our bird overnight in about 2 cups of kosher salt, a bunch of fresh thyme, dehydrated garlic, ground pepper (Do not use whole pepper corns in your brine. They are very difficult to get off your bird the next morning. They stick to the bird inside and out and need to be removed one at a time---learned from experience!), and the secret ingredient...a cup of bourbon. My roasting pan is large enough that I could fit the bird (only 11 pounds) in the roaster, rub the salt and spices all over inside and out and then cover with water and bourbon. I put this bird out on the back porch in NH at Dad's covered with a couple big rocks so the coons wouldn't get at it, but before going to bed transferred the whole thing into the trunk of my car so it wouldn't freeze. I also know how clever racoons are and didn't want to find an empty roasting pan in the morning!

Next morning:  rinse, rinse, and rinse again. You can brine with just about anything as long as you include salt and water. I always brine my bird as it keeps it more moist plus gives you more time to play with your bird. If you have a huge bird (one year I cooked a 23 pounder!) you can brine in a big, tightly secured plastic garbage bag. 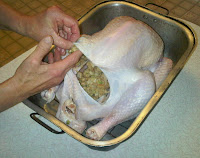 Here's a stuffing tip, which you may already do, but if not it is another trick for keeping your turkey moist. Pull apart the top of the skin and place the stuffing between the skin and the breast meat. Put a bunch of stuffing under the skin at the back end of the bird, too. This also gives the stuffing a really rich flavor.


I made a mince pie for dessert and some cranberry orange jello. The jello, made from unflavored gelatin was interesting. (Note, I did not say delicious!). Very simple to make, but the canned Mandarin orange segments were too tart and the texture was a little odd. I would definitely make the cranberry gelatin again, but would try a different fruit. Send me an email if you want the recipe so you can try your own modifications! 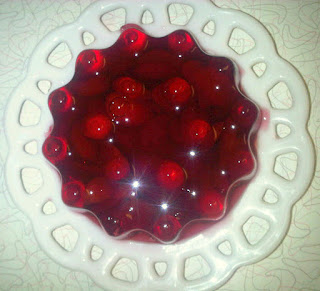 
You know my philosophy...
cooking is all about having fun, being creative, trying new things. They all won't be winners!


WISHING YOU ALL A VERY HAPPY DECEMBER
FILLED WITH MUCH LOVE AND
KITCHEN FROLICKING AND FESTIVITIES!
SEE YOU NEXT TIME WITH
WWW.COOKWITHCINDY.COM!
Posted by Cindy Rabbitt at 2:29 PM