I made ribs for Super Bowl last Sunday and I must say they were really delicious! I know self praise is no praise at all, but these ribs were pretty special. I think both the barbeque sauce and cooking them for hours made the difference--the meat fell off the bone! They were the best ribs I have ever made or eaten! I know many recipes call for cooking your ribs with a dry rub and adding the sauce after, but I decided to try cooking the ribs in the sauce and I think it made all the difference. I also marinated the rack for several hours before oven roasting and I think that also added a good depth of flavor. Here's what I did...

Put all ingredients in a small saucepan and heat until the sugar is dissolved. Cool. Place ribs in a large roasting pan and cover with the marinade and let sit, covered in the refrigerator for at least 2 hours turning ribs every 45 minutes or so to make sure all sides benefit from the marinade. 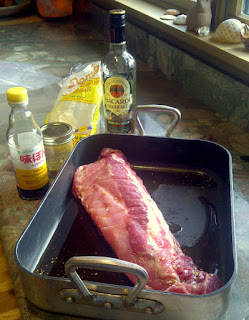 Preparation:
Combine all ingredients in a medium saucepan. Bring to a boil. Reduce to simmer and cook uncovered for about 1 hour or until you have the desired thickness. Stir every once in awhile. If it gets too thick, thin it with a little water. Let cool. Your entire house will smell like a barbeque joint while this is cooking!
You can doctor this sauce any way you like with cumin, more hot sauce, liquid smoke, cinnamon, molasses, beer or wine, etc., etc....that's the fun of it and once you make your own BBQ sauce I don't think you will buy it again! It's delicious and very easy.

After ribs have marinated for 2+ hours pull out of the marinade and let drain on paper towels. Wash and dry the roasting pan and line with 2 strips of heavy duty foil. Lay the ribs on the foil and cover with a generous cup of the BBQ sauce. Wrap the foil tightly so steam stays inside the foil.

Put the ribs in the oven and do not check them for 3 hours. After they have baked, open the foil, add more sauce and brown under the broiler for about 5 minutes or until they have a nice BBQ crust, but watch so they don't burn...there's lots of sugar in the sauce that can catch quickly.

Cut ribs apart and serve on a platter with extra sauce and plenty of napkins!

I served our ribs with an interesting beer from Allagash Brewing, Co., Portland, Maine, thanks to our friends Ed and Louise who gave us this very special Allagash Curieux. Curieux is the French word for curious or intriguing and this beer was all of that and more. The beer is aged in Jim Beam bourbon barrels for 2 months creating a rich, creamy, sweet flavor with a hint of bourbon. It is stronger in alcohol than regular beer and was the perfect accompaniment to the ribs.

As a starter to the ribs I made a pizza with whole grain crust. I bought the dough from the store all ready to roll out, but you could easily make it yourself if you wanted. 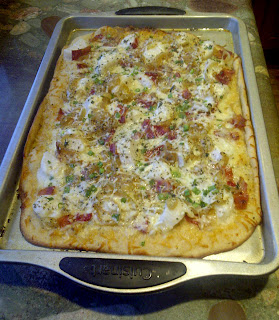 For carmelized onion:
2 medium onions, sliced thinly
Olive oil for pan
1/4 tsp. salt
Juice and zest from 1/4 lemon
1/4 cup water. More if needed as the onions carmelize.
(This will make more than you need for the pizza, but it's always nice to have carmelized onions on hand to add to sandwiches, stirfries or great on a burger with melted blue cheese.)

Start by carmelizing the onions. Cut 2 medium onions into thin rings. Heat a large frying pan with a little olive oil. Add the onions and reduce to lowest simmer. Add 1/4 tsp. salt and the juice and zest (yellow part only) from 1 quarter lemon. Finally add 1/4 cup water. Cover tightly and let steam for about an hour until onions are very soft and caramel color. Check on them every 20 minutes or so to make sure they are not getting brown. Add more water if they start to get dry. Remove from heat to cool. The onions get very sweet as they cook.

You can do this in the morning or even the day before. Cover tightly with plastic wrap and place in fridge until ready to use.

Next, fry the bacon until very crisp. Cool. Cut into 1/2 pieces and set aside. This can also be done ahead.

Sprinkle your counter with a light coating of flour. Coat the pizza dough in the flour by rolling it around in the flour. Roll out pizza dough with a rolling pin (if you don't have a rolling pin, a heavy glass works; just be careful not to break the glass!) until it is only about 1/4 inch thick. One of these days I am going to buy a pizza stone, but in the meantime I use a heavy baking sheet which works just fine. Place the dough in an ungreased baking sheet or pizza stone.
Preheat oven to 400 degrees.

Build the pizza by starting with the 2 cheeses (reserve a little of both for topping), oregano, scallops (cut in half if they are honkers), bacon, carmelized onion, a little more of the 2 cheeses and finally the scallion tops.

Drizzle the entire pizza with a liberal amount of olive oil. I am sorry I did not measure this so can't give you an exact amount. I just very slowly drizzled the oil in an even pattern over the entire pizza.

Since this site is about having fun in the kitchen no matter what the outcome I am sharing the Super Bowl dish that was not the best. I have had the most scrumptuous yucca root in garlic at various Cuban restaurants so decided to try to recreate it at home. I probably should've looked up some techniques before starting, but I just forged ahead on instinct. This time they were a little off. The yucca I know and love is crispy on the outside (probably deep-fried) and soft and creamy inside. I started by peeling and chopping the yucca into cubes. This is a very hard root and is usually waxed. I find it easier to peel by first cutting in 3-4 inch pieces.

I peeled a whole small head of garlic and chopped finely. Mix both yucca cubes and garlic in a liberal amount of olive oil and let marinate for several hours turning every so often.
I put the marinated yucca in a preheated 400 degree oven for one hour. One mistake was I did not cut the cubes small enough. 2nd mistake, I think I should've par boiled the yucca until it was soft and then fried in a frying pan with oil and the garlic, rather than baking raw for an hour. I am going to try that method and let you know how it comes out. If any of you have a favorite way of preparing yucca root, please let me know.

I forgot to take a photo of the finished yucca, which looked pretty good, but was not at all creamy, in fact was quite hard, but did taste good.


I have so many more food things I want to share with you,
but will save them for next time.
Please tune in again soon for another episode of:
www.cookwithcindy.com﻿﻿