Hello, my friends! It's been a while since we have talked 'food' together and I have missed it and missed you, so with less than a week to Thanksgiving, here goes!

I like to treat my husband, Jerry, to a special meal on his birthday, which is November 13. We think of his special day as the kick-off to holiday season. I asked him what he wanted this year and he said "Ham and Beans". I told him that was way too ordinary and I would just have to surprise him. And surprise him I did with my Mom's recipe for traditional Boston Baked Beans and a very special ham from E & R Pork in Tucson (https://www.facebook.com/EandRPork/). Neither of us had ever been to a pig farm and it was quite an experience.
More on E & R Pork in a moment, but let's get down to beans. Beans are not difficult or complicated to make; they just take a long time to cook. I cook them on top of the stove, probably because that is how my Mom made hers, but you can also do them in the oven or a slow cooker. The ingredients are simple:
﻿
Ingredients:
4 cups; about 2 #'s navy beans
1 whole onion, peeled
4 whole cloves
2 tsp. dried mustard
1 1/2 cup molasses (not black strap)
1/2 cup  brown sugar
1/2 cup maple syrup
6 slices thick-cut bacon, cut into chunks
2 Tbsp. Salt
Black pepper to taste

Preparation:
Rinse beans in a large colander to make sure there are no little stones. Place in a large bowl with enough water to cover by 3 inches and soak overnight.
Next morning, drain beans, place in a large (at least 6 Qt.) Dutch oven or large, heavy-bottomed pot, and add cold water to cover by 1 inch. Press the cloves into the onion and add the onion to the beans. Bring to a rapid boil over high heat. Reduce heat to low and skim off the foam. Simmer for 15 more minutes. 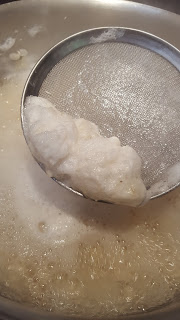 Add remaining ingredients and stir until combined. Cook on low heat for 4 to 5 hours or until beans are tender. Add water if necessary to keep beans just covered with liquid. This makes a huge quantity of beans, but they freeze well and will keep in the fridge for up to 10 days. 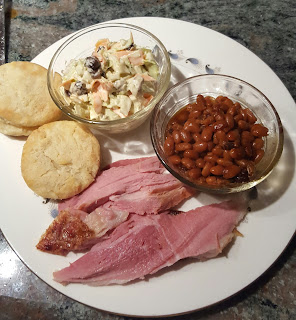 With the ham and beans, I served my husband coleslaw and biscuits.

Preparation:
Preheat oven to 400 degrees. Sift flour, baking powder, sugar, and salt into a large mixing bowl. Transfer to a food processor. Cut butter into cubes and add to flour, then pulse 6 or 7 times until the mixture resembles rough crumbs. You can also cut by hand using 2 knives or a pastry cutter, but the food processor is much easier. Return dough to bowl, add buttermilk and stir with a fork until it forms a rough ball. It may be a little sticky, which is not a problem.
Turn the dough out onto a floured surface and roll it into a rough rectangle about an inch thick. 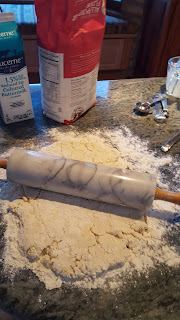 Fold it over and gently, roll it down again. Repeat 6 times. The key to flaky biscuits is a gentle touch. You don't want to over-work the dough and as you continue folding and rolling it all comes together.
Cut the dough using a floured glass or biscuit cutter. Do not twist cutter when cutting; this will crimp the edges of the biscuit causing it not to rise.
﻿﻿
Brush the biscuits with the 2 Tbsp. of melted butter. Place the biscuits on a baking sheet and bake until golden brown; approximately 10-15 minutes.

E & R PORK
This is a family affair. Rod Miller, his wife Erika Pacheco and Rod's parents are all in the farm together. Originally from Iowa and farming for many years there, they have been raising pigs in Arizona now for 25 years. They use no hormones or antibiotics and are non-GMO. They sell every part of the pig to individuals, stores, and restaurants all over the world. I bought a ham for Jerry's birthday and it was unlike any ham I have ever had. It actually tasted like real meat: Cured, lightly salted, smoked, and fully cooked. This was a beautiful piece of meat. The cut is called a Short Shank which comes from the back butt/leg. It has a nice outer layer of fat and marbling throughout. Because these pigs are raised so gracefully and in a beautiful environment the fat is very good for you. 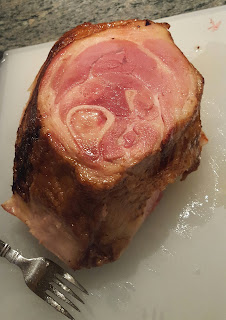 The 3 breeds E & R raise are Red Wattles, Berkshire, and Duroc, but over time they will concentrate on the Red Wattles, which according to the Red Wattle Hog Association are a rare breed. Read more here: http://www.redwattle.com/

Pigs are social creatures and for the most part enjoy each other's company. 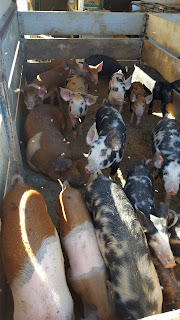 Rod also treated us to some cured meat(chacuterrie) he makes using a coffee crust.
﻿
Never wanting to waste, I am making stock for a lentil soup with the ham bone, carrots, onion, celery and fresh herbs: chives, oregano, sage. 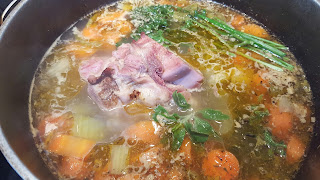 I also fried some of the fat into little bites resembling Chicharrones. The difference is Chicharrones are deep fried pork rind, and these are all fat, slowly rendered in a frying pan. They taste like bacon on steroids. Totally awesome! 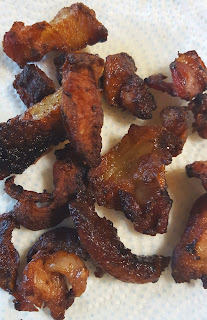 And finally, here is the rendered fat, which I will use to baste my turkey this Thanksgiving. It has a very delicate flavor. 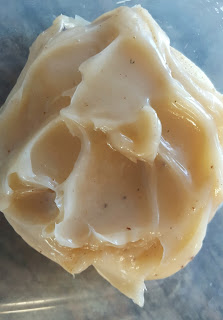 I can't wait to try some of their other cuts. I have always wanted to make hogs-head cheese so possibly there is a pigs head in my future! That will make a fun blog! To order your own pork, text Rod at 520-490-0166.

To conclude Jerry's birthday I made Chocolate Molten Lava Cakes. I am going to save that recipe until next time, but here's a tease. This is a very chocolatey dessert! 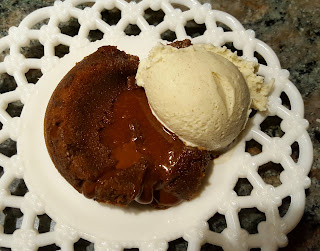 WISHING YOU ALL A TASTEY, LOVING
AND FUN-FILLED THANKSGIVING!
I AM GRATEFUL TO YOU ALL FOR FOLLOWING MY FOOD BLOG AND FEEL BLESSED IN SO MANY WAYS.
LOVE, GRATITUDE, AND PEACE!
UNTIL NEXT TIME, KEEP ENJOYING
THE ART OF CREATING FINE FOOD.
www.cookwithcindy.com
Posted by Cindy Rabbitt at 9:06 PM