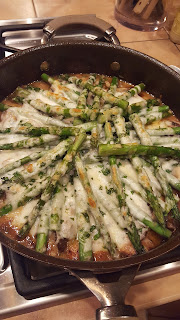 I found this recipe on another food blog (Natasha's Kitchen) who said she copied the recipe from The Cheesecake Factory, and it looks like many fellow food bloggers have done the same as the recipe appears on many different sites. I am probably the only person in this country who has never been to a Cheesecake Factory, but if they serve food like this I may have to try it. Natasha did say her home-made version was better...as making anything at home almost always is! I made a few tweaks in the recipe myself.

Preparation:
To blanch asparagus: Remove ends of stems from asparagus bottoms, which can be tough and fibrous. Fill a large bowl with ice and water. Fill a medium pot with 6 cups water, bring to a boil and add 1 Tbsp. salt. Add asparagus and boil uncovered until crisp tender and bright green; no more than 2 to 3 minutes. Remove from hot water and drop into ice bath to stop the cooking. 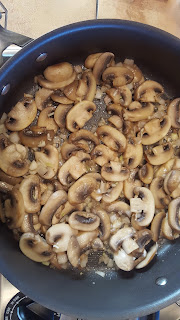 Place a heavy oven-safe pan over medium-high heat and melt 2 Tbsp. butter and 1 Tbsp. oil. Add sliced mushrooms and cook 5 minutes until soft. Stir in diced onion (or shallot) and cook another 3-4 minutes. Add minced garlic, then season with 1/4 tsp. salt and 1/4 tsp. black pepper, and 2 Tbsp. parsley. Cook another couple of minutes, then remove mixture to a plate. 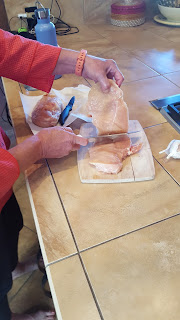 Slice the chicken breasts in half lengthwise and pound each cutlet between plastic wrap until each piece is 1/4" thick. Cut breast into serving size portions. Dry on paper towels and liberally salt and pepper both sides. 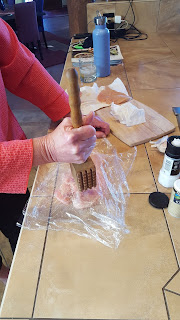 Place the same pan you sauted the mushrooms in over medium-high heat and add 1 Tbsp. butter and 1 Tbsp. Olive Oil. When foaming butter subsides add chicken breasts and saute 3 to 4 minutes per side or until golden and cooked through. You may have to do this in 2 batches as you don't want to overcrowd the pan. Add more butter/olive oil if needed. Remove the chicken from the pan to same plate with mushrooms. This allows all those wonderful chicken juices to blend into the mushroom mixture! 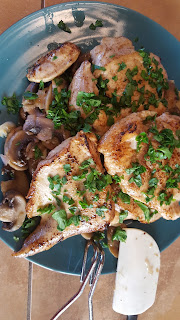 In the same pan, add 1 1/2 cups Madeira (I added half the bottle, which is about 2 cups.) and boil until reduced by half; at least 5 minutes of vigorous boiling. 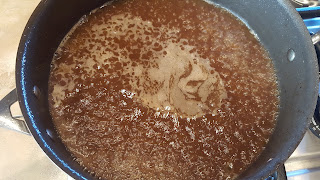 Scrape bottom of pan to deglaze as wine is cooking. Add 1 1/2 (I used 2 cups.) cups beef broth and boil until 1 cup liquid remains; about another 10 minutes. Reduce heat to medium, add 1/2 cup cream and simmer until sauce thickens; about 2-4 additional minutes. Season with salt/pepper.
﻿
Once your sauce is to desired thickness, return chicken to the pan and coat both sides with this yummy sauce. Top with mushrooms, asparagus and sprinkle with 1 cup of mozzarella cheese. Broil 3-4 minutes or until cheese is melted and slightly browned. Once the cheese is browned you can turn off the broiler and leave in the oven for a few more minutes while you begin plating. Remove from the oven and garnish generously with freshly chopped parsley.

Try this recipe. It does involve a few steps, but most of the dish can be prepared in advance, which makes it perfect for a dinner party. I served with creamy mashed potatoes and chunky French bread for dipping into that luscious sauce!


THANKS AGAIN FOR TUNING IN
TO ANOTHER EPISODE OF:
WWW.COOKWITHCINDY.COM