A couple weeks ago our hot Arizona weather cooled down a bit and I decided to stoke up the smoker. And did I ever go smoking crazy! I have a new cookbook by Steven Raichlen, PROJECT SMOKE, which is filled with fabulous ideas; some his original, and others from smoking adventures around the world. Basically Raichlen believes it is possible to smoke anything. I smoked from 8:30 in the morning until 10:30 that evening. I will have to share these recipes over a couple of blog posts as it is just too much to cover in one post. So I will start with the feature attraction: 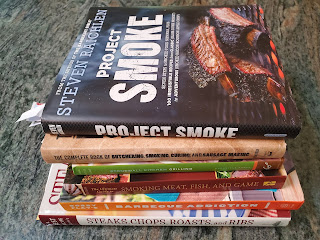 "If there's one dish that epitomizes barbecue, that every aspiring smoke master hopes to perfect, it's brisket." Steve Raichlen 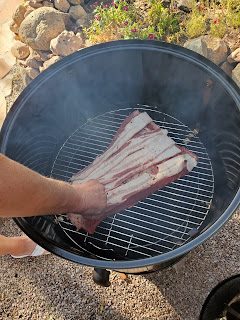 I learned that there are several cuts of beef brisket, but the most commonly found in your local grocery is a small, lean, center-cut 'brisket-flat', which is what I bought. Mine weighed about 5 pounds. As Raichlen predicted most of the fat had been cut off this already lean cut of meat so at his suggestion I layered slices of thick-cut bacon over the top of the brisket as I began to smoke.
I seasoned very simply with lots of salt and freshly ground black pepper. Next, with the help of my husband, got the smoker up to a perfect 225 degrees. Checking the fire and temp about every hour is necessary to keep the temp between 225 and 250 degrees. My smoker has a water pan so I kept that filled with at least 3 inches of water. 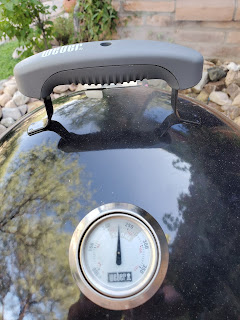 This brisket smoked for 10 hours at which point the exterior was darkly browned and internal temp registered 175. I then removed the brisket from the smoker and wrapped it tightly in parchment paper. Raichlen recommends butcher paper, but I did not have any. This step keeps the moisture in the meat for the final smoking. Put it back in the smoker for another couple of hours. When done, internal temp of meat should now be around 200 degrees. The 'smoke masters' tell the doneness by look and touch. A properly cooked brisket should jiggle when you shake it. There was not much jiggle left in my brisket, but I proceeded with Raichlen's suggestions for making a perfect brisket. 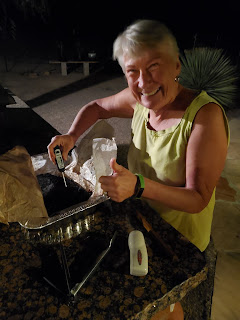 As you can see, evening has fallen, but not trusting my 'touch/feel' skills, I was very happy my brisket finally registered 200 degrees.
The final step involved placing the cooked brisket, still wrapped in its paper, in a cooler for 2 more hours. This step ensures that any moisture that has released into the paper is re-absorbed into the meat.
By this point it was too late for supper, but we were anxious to try it. 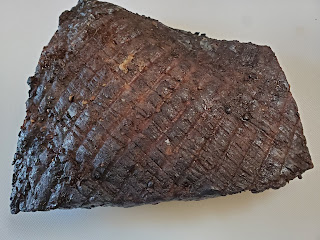 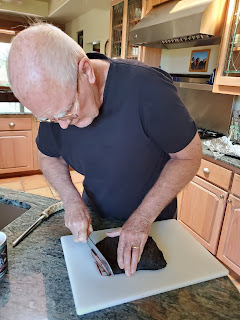 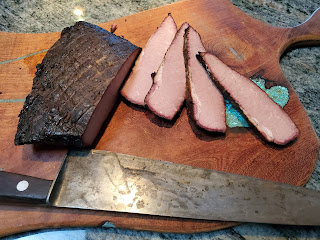 I am very pleased with my first smoked beef brisket. It was a bit overdone so lost some of its juiciness, but the taste more than made up, and the fun of spending the day smoking was well worth it. The brisket was wonderful as a meal the next night with potato and veg. It also made fabulous sandwiches with BBQ sauce and I also ground some to make hash. Other items I smoked on that day included: ice cubes, which were perfect in the scotch I had at the end of my 14 hour smoking day!; flour/water to make smoked bread; eggs, and chicken thighs. The ice cubes were the best!...or maybe it was the scotch at the end of a long, but very enjoyable and satisfying day!
ALL FOR TODAY...
THANKS FOR TUNING IN!
MORE SMOKING TO COME VERY SOON!
WWW.COOKWITHCINDY.COM
Posted by Cindy Rabbitt at 1:35 PM