Last year I made this cake for my dear friend, Joyce Prim's birthday, and this year she requested it again. One of the things that makes me happiest is pleasing people with food so I was thrilled she wanted the cake again on her special day.

This cake is basically a traditional Tres Leches cake, but with the addition of coconut milk for one of the tres milks, pineapple, a little rum, and topped with toasted coconut to give it a Pina Colada flavor. It really should be called a Cuatro Leches cake because by the time you frost with whipped cream you have 4 milks, not 3, but who's counting. It's darn delicious! 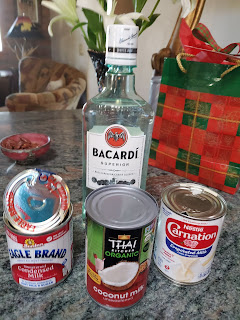 1/2 cup unsweetened coconut milk, Shake the coconut milk vigorously before you measure it out.

FOR THE WHIPPED CREAM FROSTING:

TO MAKE THE CAKE:

Combine the flour, baking powder, and salt in a bowl. Set aside.

In the bowl of a stand mixer fitter with a whisk attachment, beat the egg yolks and sugar on medium high speed until thick and pale in color, and falls in ribbons when you lift the whisk, about 5 minutes. You can also do this with a hand mixer, but the standing mixer makes it much easier.

Stir in the coconut milk, vanilla, and rum. Gently fold in the flour mixture.

In another mixing bowl, beat the egg whites on medium high speed to soft peaks. Gently fold the egg whites into the rest of the batter in 3 additions. Stir in half of the pineapple chunks.

Pour the batter into the prepared sheet pan, Sprinkle the remaining pineapple on top of the batter. Bake until cake is golden brown and the center bounces back when touched gently, about 30 minutes. Let cool completely. 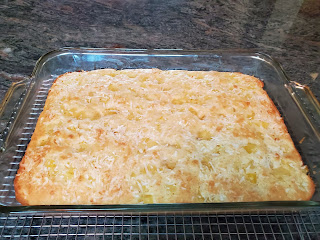 TO MAKE THE LECHES:

Use a skewer or fork to very gently poke holes in the cake, pressing them all the way down to the bottom. This allows the 3 milks to penetrate the cake. Pour the leches mixture over the cake, careful to cover it all. It will be quite goopy. Cover with plastic wrap and chill in the fridge for at least 3 hours or overnight. it takes time for the cake to drink up all that milk! 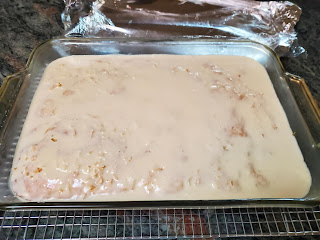 TO MAKE THE TOPPING:

Whip the heavy cream until it starts to thicken. Add the sugar, vanilla and rum, and whip to soft peaks. Spread the whipped cream on top of the cake. Top with toasted coconut. 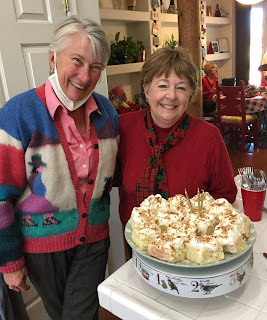 It was a happy, joyous celebration. Wishing you many more Mrs. Prim! I greatly look forward to the next birthday celebration!

FROM THE HEART AND SOUL

OF MY KITCHEN TO YOURS! 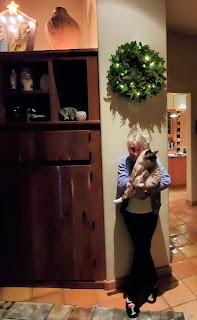 Posted by Cindy Rabbitt at 4:42 PM