I have never been accused of being limited when it comes to food. I like a wide variety and try to continually come up with new and different taste treats. From Crubeens (Pigs Feet) to Rocky Mountain Oysters (Bulls Testicles) to any flavor of Cheesecake and everything in between! I actually have never tasted anything I haven't liked. That said, my husband and I generally go on some kind of a fairly austere diet in January. We have done Paleo, Vegan, South Beach, and many others. It doesn't always last all month, but we usually go 2 or 3 weeks. This year we decided to do a 4-day Juice Fast to kick-start the year. My neighbor and good friend, Lori Itule, once again loaned me her Dad's heavy-duty Champion brand (circa 1950's) Juicer and on January 2 we began. This is a quality piece of equipment and makes Juicing easy. 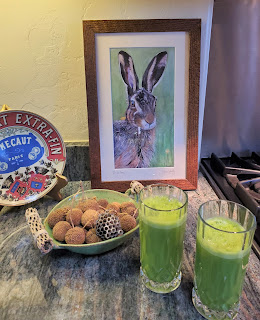 Pictured behind the drinks is a beautiful print, which our good friends Steve and Debby Vis gave us after visiting with us in Spiddal, Co. Galway, IRE in the summer of 2019. The artist, Martine Moriarty is from Cork and most of her work is in oils, watercolors, silkscreens, and animation. She primarily paints scenes from around Cork. This one is called The Dingle Hare.
The beauty of making Juices is that you can really add any vegetable with some fruit that you like. Dreamy Greenie contains:
Ingredients:
Spinach
Mixed Greens
Celery
Broccoli
Cucumber
Fresh Parsley
Green Apples
Lemons
Ginger Root
Preparation:
Run it all through the high-powered juicer and voila!
Next, my husband, Jerry's favorite...
GAZPACHO
This Juice drink has all the ingredients of Gazpacho soup, except the bread and sherry vinegar. It is really yummy and a perfect lunch-time drink.
Ingredients:
Tomatoes, I used lots of Plums
Celery
Green Pepper
Red Pepper
Red onion, small amount
Cucumber
Garlic
Fresh Parsley
Dried oregano
Dash of salt, to taste.
Preparation:
Put all ingredients through the Juicer and you have a Juice version of Gazpacho. Taste and season with a little salt. This really makes the difference!
Next Juice recipe I will share I call...
SWEET BEET AND MORE 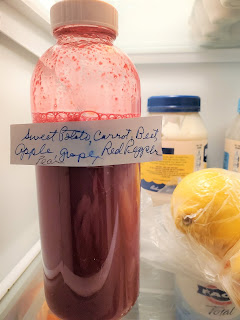 This drink we had in the evenings as "supper". It is hardy and not really that sweet because of the earthy flavor of raw beets and sweet potatoes, but still quite delicious.
Ingredients:
Beets
Sweet Potato
Carrot
Red Pepper
Red Apple
Red Grape
Pear
Preparation:
Same as above!
And finally, one of my favorites...
SPICY CARROT GREEN APPLE
Ingredients:
Carrots
Green Apple
Ginger Root
Preparation:
Blend all and taste for seasoning. Add more ginger to make it spicier. On one batch I added a very ripe pear, which gave it a little more sweetness, but carrots themselves are inherently sweet so this made a great snack-drink. So simple. So delicious.
Once our 4-day Juice fast ended, we continued to eat a lot of vegetable, but in their full form, both cooked and raw. We slowly added fish, shrimp, chicken and graduated last week to this luscious piece of pork.
BACON WRAPPED, FIG STUFFED PORK TENDERLOIN 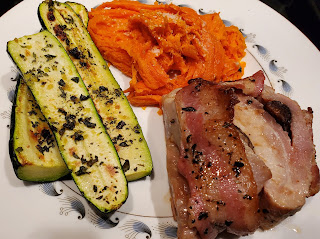 Ingredients:
Pork tenderloin
3 Tbsp. Dijon mustard
2-3 cloves finely minced garlic
Sweetened Dried Figs to cover inside of pork, cut in half, stems removed
Bacon to wrap. I used 3 strips of thick-cut bacon
Olive Oil for drizzling in pan
Salt/Pepper
Dried Sage, about 2 tsp.
Preparation:
Preheat oven to 400 degrees.
Butterfly the tenderloin. Using your sharpest knife, cut through the side of the pork leaving the center intact so you can open like a book; meaning do not cut all the way through. Liberally salt and pepper the inside of the pork. Spread the Dijon mustard evenly over both pork halves. Sprinkle with garlic. Cut each fig in half and place on the bottom half of the tenderloin (fat side is the top). Close the pork, salt and pepper outside of pork and wrap with bacon. 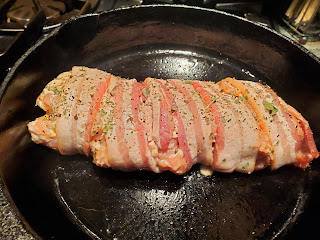 Drizzle olive oil (about 2 Tbsp.) in a cast iron or heavy bottomed skillet. Heat until it's nearly smoking. Brown the bacon and then place in the preheated oven for about 20 minutes or until meat thermometer reads 145 degrees. That is the recommended doneness, but I usually remove once it reaches 140 because #1) I don't like dry pork; and #2) the pork continue to cook once you remove it from the oven.
THAT'S IT FOR TODAY!
VERY HAPPY TO BE BACK TO EATING REAL FOOD,
ALTHOUGH THE JUICE WAS GREAT FOR A FEW DAYS!
NEXT TIME I'M GOING TO TALK ABOUT SOME VERY SPECIAL BEANS FROM A NEW AND LOCAL COMPANY, CALLED 'PRIMARY BEANS'.
STAY TUNED...
www.cookwithcindy.com

Posted by Cindy Rabbitt at 4:40 PM