4th of JULY FESTIVITIES FROM AFAR!

For the last several years, excluded last year of course, because of COVID, we have been in Ireland for the 4th of July. I like to try to make something that is very American to honor our biggest national holiday. I have made cheesecake in the past for the occasion, but this year I tried a new recipe. I also slow-roasted a duck, which is not traditional July 4th fare, but because it was 50 degrees and drizzling all day, it seemed fitting to have the oven going for hours and very comforting to smell the delicious flavors of roast duck. But first, we're starting with dessert! 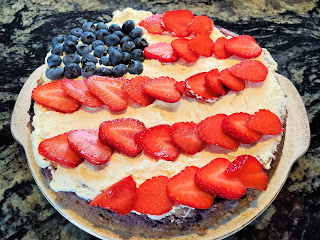 The decorations are a bit amatuerish, but it sure was fun putting this cake together! I found the recipe online and liked the sounds of a blueberry cheesecake as I have never had that before, but decided to add the strawberries and blueberries to create the American flag. Corny...I know, but made us both feel very festive!

This recipe calls for a traditional Graham Cracker crust, but because you can't find Graham Crackers in Ireland I used tea biscuits. Digestives are buttery and not, too sweet. 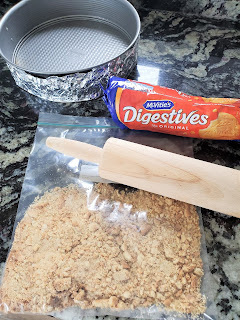 2 large eggs (Eggs in Ireland are so fresh!)

2 Tbsp. sugar, more if you like the cream very sweet.

Preheat oven to 325 degrees (160 Celsius). In a food processor, blend blueberries until very smooth. In a small saucepan, over medium heat, add blueberry puree, sugar and lemon juice. Bring to a boil, then reduce heat and let simmer until slightly reduced, stirring occasionally for about 10 minutes. Set aside and let cool to room temperature. I used only about 1 1/2 cups of the puree, but it's a great left-over to make blueberry parfaits.

Next, make the crust. In a large bowl, mix together Graham Cracker crumbs, melted butter and sugar until well combined with mixture resembling wet sand. Press into bottom and up side of an 8"or 9" springform pan that you have previously wrapped tightly in foil. 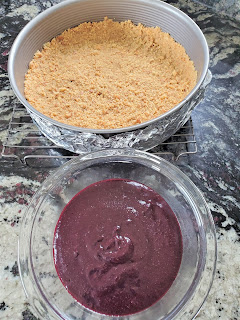 I love the look and color of the blueberry puree! It is refreshingly tart, which makes for a beautiful contrast with the rich and sweet cheesecake.
To make the parfaits:
Layer Granola, plain yogurt sweetened with maple syrup, blueberry puree and fresh blueberries.
Scroll all the way down for the Granola recipe:
http://cookwithcindy.blogspot.com/search?q=granola 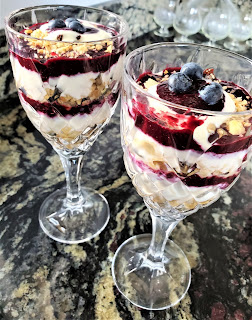 On to the cheesecake:
In a large bowl using either a hand mixer, stand mixer or good old fashioned whisk, beat the cream cheese and sugar until no lumps remain. Add eggs, one at a time, then stir in vanilla and sour cream or yogurt. Add flour and salt and beat until just combined. Fold in blueberry puree, but don't mix it completely. Pour the cheesecake mixture into the crust. 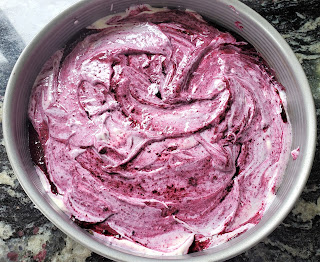 In a perfect world, I would have done the next step...
Place the cheesecake into a large roasting pan and pour enough boiling water to come halfway up the springform pan. That is why you wrap the cheesecake pan tightly in foil. No matter how good your springform pan clasp is you do not want any water seeping into the cheesecake. This is called a bain marie water bath; a French method used to prevent cracking and help cook evenly.
Because I was already roasting the duck and my oven is very little, a large roasting pan did not fit in the oven along with the duck so I just placed the cheesecake in the oven sans bain marie and baked for 1 1/2 hours until the cake was slightly jiggly, but not completely set. If I didn't have the duck in the oven, you would then leave the cheesecake in, turn oven heat off, keep the oven door ajar, and let cheesecake cool down in the oven for 1 hour. This also helps prevent cracking.
I could not use this technique either (because the duck was still cooking), but the good news is I took the cheesecake out after 1 1/2 hours and let it cool on a rack. No cracking! After cooling, cover and place in the refrigerator and let chill for at least 5 hours or overnight. I didn't have that much time, but it did cool for about 2 hours at which point I frosted with the whipped cream and then topped with blueberries and strawberries. 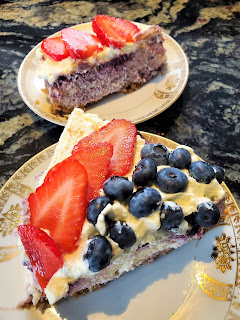 It was a little soft and texture was definitely better the next day, but boy was it delicious!!
I have previously made duck in Ireland and this slow-roasted 4 hour recipe is the one I used for our holiday meal. I made the traditional orange sauce, which was awesome, but not sure it is truly authentic. For the recipe, go to:
http://cookwithcindy.blogspot.com/search?q=duck 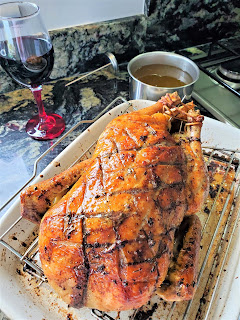 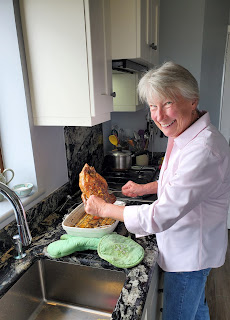 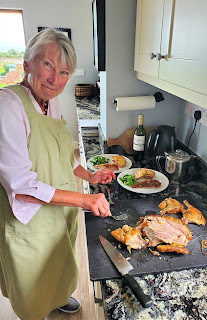 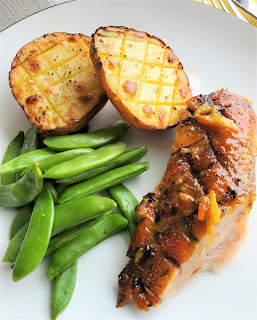 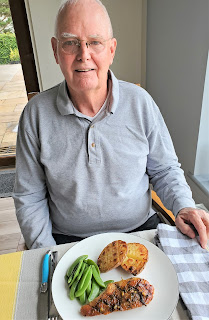 Thanks for sharing the 4th of July with us!
I also made some interesting scones for our 4th of July breakfast. Not exactly traditional Irish, but delicious!
Next time, I will attempt the perfect traditional Irish scone!
Tune in again soon...
www.cookwithcindy.com
Posted by Cindy Rabbitt at 3:31 AM