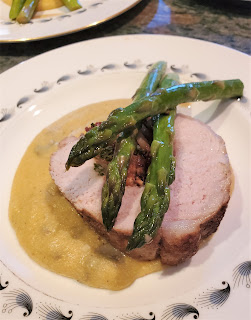 I served this on a bed of creamy parmesan polenta with lightly roasted asparagus. The combination of flavors and textures were perfect! The wine soaked cherries were a bonus as the wine became slightly thick and a little sweetened by marinating in the dried cherries for a couple of hours. This made for a delicious dessert wine. Next time, I will soak a whole bottle of wine in several cups of cherries (1 cup cherries to 1 cup wine) and serve that with a lemon and dried cherry Bundt Cake drizzled with a reduced cherry wine glaze. Doesn't that sound yummy?! I used an inexpensive, but full-bodied red wine blend.

I have never done a pork tenderloin in the slow-cooker and was surprised at how well it turned out! Because our son, Michael was visiting, it gave me the whole afternoon to play with him while the pork cooked. 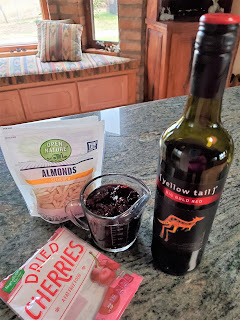 FOR THE DRY RUB:

TO BROWN THE PORK AND PREPARE SLOW COOKER:

First, place the dried cherries in a measuring cup and top with red wine. Set aside for at least a couple of hours.

Next, butterfly pork loin. An average pork loin weighs about 3 lbs. Cut down the middle of the long side being careful not to cut all the way through. Open like a book. 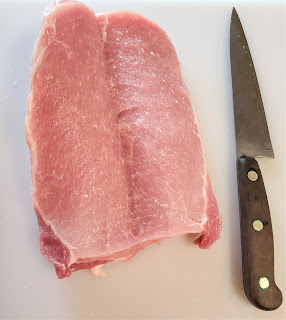 Liberally salt all sides and firmly press the dry rub onto all sides. Set aside while you make the stuffing.
TO MAKE THE STUFFING:
Melt 2 Tbsp. butter in a heavy bottomed skillet over medium-high heat. Add orange zest and juice. 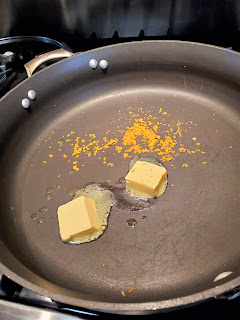 Next add the onions. Reduce heat and cover the pan. Caramelize the onions stirring occasionally until lightly browned and soft.Once the onions are caramelized, strain the dried cherries (saving the wine) and add to the pan along with 2 cloves garlic, sliced almonds, 1/4 cup parsley, 1/3 cup feta cheese. Stir well to combine and remove from the pan and place stuffing into a bowl to cool. 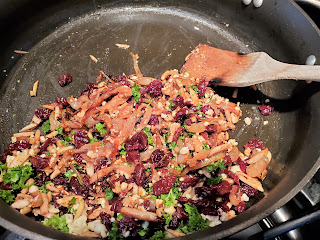 Once the stuffing has cooled spread evening over the butterflied pork loin. 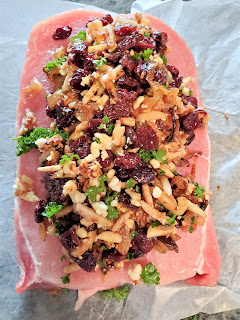 Close the pork and tie with butcher twine. In the same pan you cooked the stuffing add 2 Tbsp. olive oil and heat until smoking. Brown the pork on all sides. 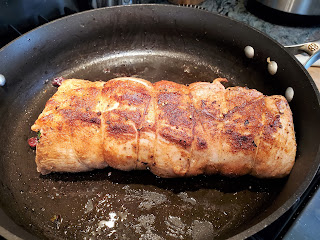 Add 1/2 cup chicken stock to the slow cooker, set on high. Add the browned pork and drizzle 1/4 cup olive oil over the top of the pork. After one hour, reduce heat to low and cook for another hour. USDA recommends internal temp of pork loin at 145 degrees. Pork dries out very easily so I like to cook to about 140 degrees. With this juicy stuffing there was no chance of drying out, but you do not want overdone pork! 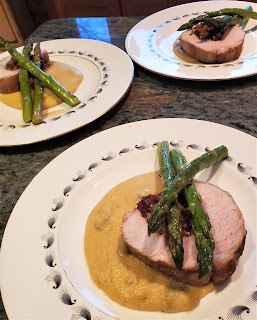 Posted by Cindy Rabbitt at 2:07 PM