It was fun last time to talk a little about my Mom. She was such a big influence on my life in general and of course my love of cooking. July 3rd would've been her 86th birthday and also my folks 65th wedding anniversary. I miss her very much, but have so many happy thoughts and memories, especially when I am in the kitchen!

I grew up eating wild game and fish; mainly fresh water fish as we lived in a small, rural dairy farming community in NH. Every weekend the entire family--all 5 of us!--went fishing and we ALWAYS caught our limit. 50 fish every week. We ate lots of trout, perch, pickerel, bass, pike, and even walleye, which was a real treat to catch. One of my favorite memories of fishing was going to my grandparents house, only a short distance, visiting for a bit and then heading out to fish for brook trout. I would usually go with my Dad down the brook one way and my Mom would go with my sister in the oppositie direction. My brother, being 4 years older, was able to fish in between us and we would all meet up and compare catches. Little brook trout are the best; not the stocked type, but the real thing that is born right in the brook. Sweet tender and delicious...as are the memories.
Now on to some cooking!  I now live half the year south of Boston on Cape Cod Bay; the other half of the year in Arizona, so am blessed with ocean and desert. When in New England we eat a lot of seafood--lobster, scallops, clams, mussels, oysters...you name it, I love to cook it and my husband and I LOVE to eat it. I feel like anything you can get in the wild, whether it be land, sea, pond or stream is better than what we can buy in the grocery store. Commercially grown fruit, veg, meats, poultry have reached an all-time low (in my opinion) in terms of health and quality and our treatment of commercially raised animals: cows, chickens, pigs, in most cases is deplorable.

I want to start today with something that is plentiful in these parts...So let's begin with... 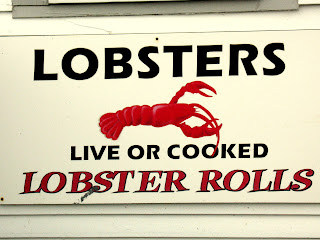 During the summer, we eat lobster at least once a week. Usually I just boil it and the trick here is not to overcook.  A small lobster, called a chick, is 1 to 1 1/4 lb. They are usually the cheapest (right now selling for $4.99/lb.) and are the best buy for your money. The step down below a chick is a cull which has only 1 claw...what's the point!...since the claws are some of the nicest meat. The price, in New England anyway, goes up about $1 per additional pound, so 2 lb. lobsters are going for $5.99 and so on up to lobsters as large as 5 lbs. I bought my husband a 5 pounder for his birthday one year and it was a big disappointment. Sometimes the meat does not fill out the claw so you are paying for a lot of shell.  Also the meat on the larger lobsters can be a bit tougher.  Below you will see an exception...This lobster was caught by my husband's brother-in-law, Chris, who is a lobster/fisherman on the Cape. 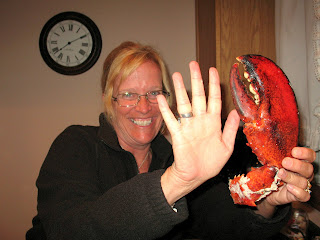 Not sure how much this one weighed, but as you can see the claw is larger than my friend Diana's hand!  And this lobster was tender and delicious.

How to Cook a Lobster
Get a large pot--lobster pot or I use a large canning pot that I bought at a yard sale; any large pot will do, but has to be big enough to get the water boiling hard and fit a couple lobsters in under the boiling water.
FOR SMALLER LOBSTERS
The chix only need about 10 minutes to cook. Once the water is boiling, say a brief prayer to the lobster who is about to give up their life; thank them for this gift of food; and then drop the lobster into the boiling water. Cover immediately. Wait a couple seconds for the water to get boiling again, and then drop lobster #2 in after saying a similar prayer. Cover. Keep heat high so water boils continually, but does not boil over for 10 minutes. Turn off heat. Pour off water and let lobsters sit for about 5 minutes. They keep cooking even after being out of the water. 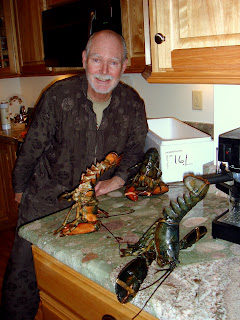 My husband, Jerry is a Lobster Whisperer. He believes if you turn the lobster upside down and balance on their heads before boiling them, they get hypnotized and are much calmer about their fate. He thinks the lobster meat stays more tender if you go through the process. Not sure he is accurate about this, but it sure is fun to watch him do it!

Below is a plain boiled lobster ready to eat. I do not prefer to dredge my boiled lobster in butter as most restaurants do. It masks the true beautiful flavor of the lobster and makes it much too rich so I eat it right from the shell, plain and simple.

HOW TO EAT A LOBSTER 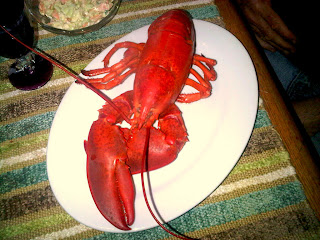 Tear off the claws first. Then separate the body from the tail. Use nut/lobster crackers to break the claws and lobster picks to pull out the meat. The knuckles are my favorite. To remove the tail meat...break off the tail fin and push your finger right up the tail until the meat is released/pushed out. If there is any green goopey stuff called tamale or tomali or red stuff called coral, which are lobster eggs/row, you may either eat or remove. I like the red row in small doses (It is super rich!), but do not care for the green at all.

Keep all the shells in the fridge and next day boil the "bones" for soup stock which can be used for boiling spaghetti if you are making lobster spaghetti or is nice in clam chowder or linguine with clams. Of course if there is any leftover lobster meat (which there usually is not), it makes a great lobster roll  or lobster cake (similar to crab cake, but better!) for lunch the next day!

Let's move into the Maine woods for some... 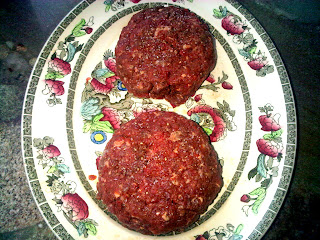 My Dad often receives gifts of moose, venison and other game and shares with me. Moose is a very mild (ungamey) tasting meat. As with beef, the steaks are the best, but I am happy with any cut and recently got some Mooseburger meat, which was yummy! You cook a mooseburger in the same way you would hamburger. I panfried our burgers in a little butter/olive oil with salt and pepper only as flavorings. Here are the burgers ready to cook. As with beef I like my mooseburgers rare so cook for about 4 minutes per side. As you can see I made the patties fairly thick.  When you butcher either moose or venison and grind the meat into burgers, you need to add fat because the meat is so lean, but the burgers are still much less fatty than hamburger in the store. 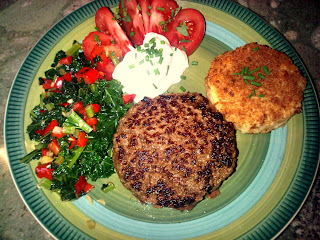 I served our mooseburgers with sliced tomato, sauted spinach, garlic and red pepper and a potato pancake topped with fresh chive. 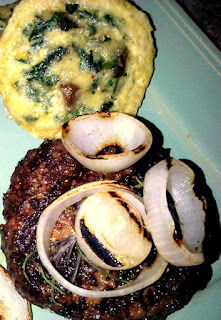 Last night I grilled a VENISON burger and served with a Spinach and Mushroom Timbale, sort of like a little souffle. I also grilled a few onions to add to the venison and as it was grilling (again about 4 minutes per side) added a sprig of fresh rosemary along with liberal salt and pepper.

SPINACH AND MUSHROOM TIMBALES
These are so easy to make and you can vary the ingredients endlessly. This is what I used last night to serve two:
Ingredients:
4 mushrooms, cut into small pieces
2 handfuls fresh baby spinach, chopped
2 eggs, well beaten
1/2 cup grated Cheddar
2 Tbsp. Olive Oil
Salt/Pepper/Spices
Preparation:
Preheat oven to 350 degrees. To start, lightly saute the veg you choose in olive oil, salt, pepper and seasonings. I used a couple dashes of onion salt and about 1/4 tsp. of garlic and onion spice blend.

Add chopped spinach and cook just until wilted. Beat eggs. Add 1/2 cup grated cheese (parmesan is also good in timbales), mix in veg and place in greased custard cups. Cook for 20 minutes until the timbales puff up (they will sink down like a soufle as they cool). Let them cool a bit. Take a knife and run along sides and bottom to lift out the timbales. 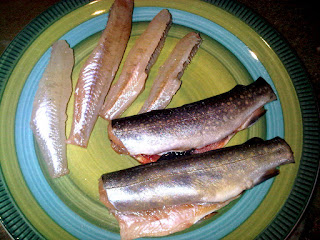 Recently Dad also gave me some perch and rainbow trout. Occasionally you can buy rainbow trout in the supermarket. Rainbows are different from brook trout (brookies) in both look and taste. Brookies are spotted, but their skin is more brown and their flesh is white; whereas rainbows are spotted and colorful (hence, the name!) with reddish flesh. They also taste a bit stronger than brookies, but are still delicious and very fast and easy to cook. 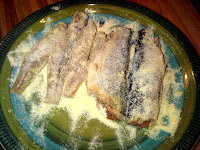 After you have cleaned your fish (they come cleaned in the store!), dredge in finely ground yellow or white corn meal, salt and pepper. Get a pan hot with butter and olive oil and drop fish in and fry for 3-5 minutes per side depending on how big your fish are. As you can see these perch are fairly small, but both fish were very sweet and tender. The bones in the perch were so small you could eat them and when the trout is cooked through the meat pulls off the bones easily. 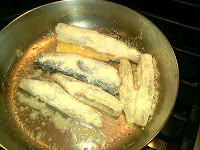 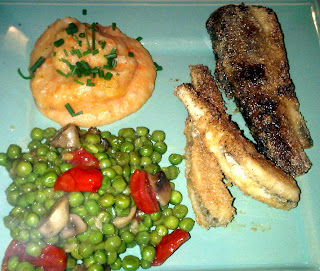 I served with peas, sauted mushroom and cherry tomatoes, and creamy Yukon gold potatoes boiled with 1 carrot and a small onion, then mashed with butter and topped with fresh chives. It tasted like "home" and brought back great memories of Mom in the kitchen!

Another taste of "home" and memory from my childhood is eating game birds: pheasant, partridge, ducks of all kinds and on rare occasion a goose. My Dad had a partridge visiting him in his yard recently and really enjoyed watching him, but unfortunately something spooked this bird and he flew hard into Dad's bathroom window and broke his neck. Dad held the bird gently as he took his last breath. We learned growing up never to waste and if you kill something to eat every part of it. In this case Dad did not kill his "pet" partridge, but since the bird did himself in, Dad was kind enough to gut it out for me. My husband had never eaten or cooked partridge so he decided to cook the bird himself. There is very little meat on a a partridge so this breast made a nice appetizer for us. Jerry parboiled the breast in a steamer pan on a bed of onion, carrot and celery, salt and pepper for about 15 minutes. He then took the breast out of the steamer basket and sauted briefly in olive oil until the skin was browned. He made a roux with butter and flour, cut it with a little cream and white wine and then served the breast in this rich, beautiful sauce with some of the veg from the mirepoix, 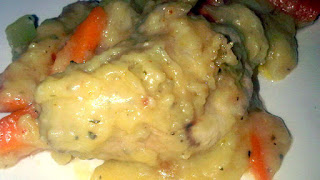 This picture does not do the partridge or Jerry's lovely appetizer justice, but you have to believe me if you are lucky enough to eat partridge it is truly a wonderful treat!

When I was a kid growing up I thought everyone ate game and fresh caught fish. I did not realize just how fortunate I was until years later!

Thanks again for joining me for another episode of: 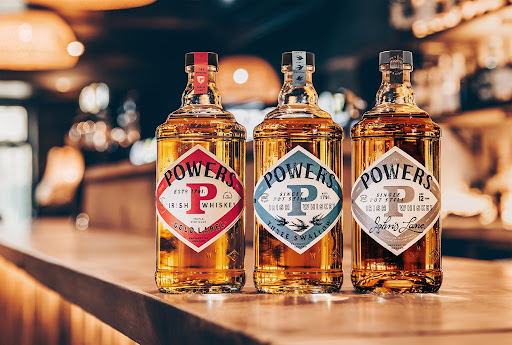