In my blog the other day, I mentioned my husband and I went to a butchering workshop sponsored by Rio Santa Cruz Ranch. I referred to the beast being butchered as a "cow". I am not sure why I have always thought of all beef as cows. Maybe because I grew up in dairy-farm country, who knows? Of course we know that females are cows and males are steers (once they have been castrated), and #25 who was being butchered for this demonstration was definitely a steer. I asked Duncan Blair, owner of Rio Santa Cruz Ranch to straighten me out on a few things, one being, Do you ever slaughter cows? Here is his answer:

"We do not slaughter cows until it is their time. We do slaughter some heifers. A heifer is a young female; in our case 22-25 months of age. Over the past 5 years the ratio between heifers and steers in the program has been 20-25% heifers. There is no difference in carcass quality, composition or flavor between steers and heifers. Heifers are often selected for beginning grass fed efforts because they "finish" sooner than steers at somewhat lesser weight."

After a bit more conversation with Duncan, here's what I've learned:
#1. Once a female animal has had at least one calf she is called a cow. Cows are slaughtered only once they become unproductive to the herd. Then they are culled and processed for hamburger.
#2. Heifer is a term used for  young female animals (generally 22-25 months).
#3. The term steer has no age reference; it's a male who has been castrated.
#4. Heifers are harvested in some cases because they "finish" sooner; meaning they bulk up to a weight suitable for harvesting, even though she may weigh less than a full grown steer.
#5. The males are just as sweet and tender as the females!

Bottom line, eventually, it all ends up on the plate. That is the job of the responsible rancher. Keep their herd healthy, fit and productive. This may be more than you wanted to know, but I feel much better having gotten this straight in my head.


JOIN ME AGAIN SOON FOR ANOTHER EPISODE OF:
www.cookwithcindy.com

Posted by Cindy Rabbitt at 9:29 AM 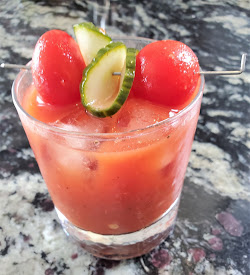