I thought it fitting for my first new recipe from Italy to be rabbit. Not sure why, but it seemed 'right'. And when I visited my local market here in Castiglione D'Orcia, in the heart of Tuscany, sure enough I found fresh coniglio for sale. 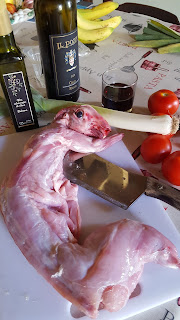 One of the things different about food shopping in other countries is that meat doesnt generally come cut up and packaged to look like something different from its original self. Here is one half of a rabbit.

I have not cooked domesticated rabbit before, but grew up eating lots of wild rabbit. The wild ones can be fierce little creatures and their flesh can be tough. My Mom used to par-boil them before frying and pan searing in butter and bread crumbs; simple, very moist and delicious! And even though I figured farm raised rabbits were not as tough, I still decided to braise, rather than pan fry.


I cut this rabbit down (thank goodness for the beautiful clever in my rental pantry-VERY impressed!) And then seasoned generously with salt / paper and browned in butter and locally produced olive oil. 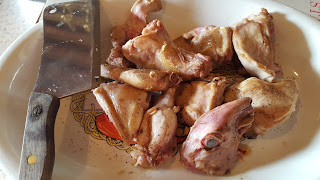 Here's the recipe, but please take lots of liberties as I used what I had on hand and I believe one of the most fun parts about cooking is being creative with the ingredients you have available. I think green peas and wild mushrooms would be a tasty addition. 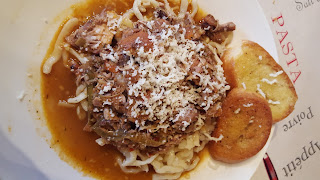 Ingredients:
2-3 pounds rabbit, on the bone
1 Tbsp. Butter, plus more for sautéing veg
4 Tbsp. Olive oil for browning rabbit, plus more for veg
1 large leek, white part only, thinly sliced
3 cloves garlic, chopped chunky
6 tomatoes, peeled and roughly chopped
3 stalks fennel, not cut up
1/2 cup roasted red pepper
Salt / Pepper
1 cup red wine
2+ cups water (I think chicken stock would be even better.)
1 Tbsp. each: thyme, oregano, rosemary (I would prefer fresh herbs, but did not have them.) These were in my Italian pantry. 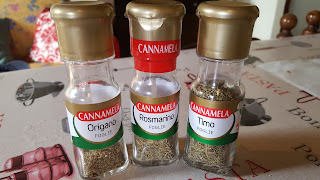 Preparation:
Cut rabbit into 4 inch pieces. Liberally salt and pepper. Place butter and olive oil in a heavy-bottomed frying pan. Cast iron would work well. Heat til nearly smoking. Brown rabbit on all sides and set aside. I used the head because it came with the rabbit, but if your rabbit comes minus the head I do not think that will pose a problem.
Broil Red Pepper: 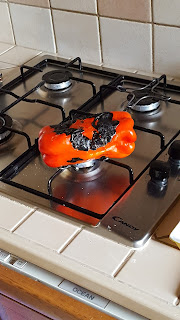 You can either broil the pepper under the broiler making sure all sides get evenly blackened, or broil right on top of your gas range. I'm not getting a very even broil, but kept moving the pepper on the burner until it eventually got scorched. With tongs, place the pepper in a paper bag and let cool. When it's cool enough to handle, rub off the charred skin, discard seeds and pith. Dice 1/2 cup and set aside. You will have left over pepper.

In the same pan you browned the rabbit add 1 Tbsp. Butter and 2 Tbsp. Olive oil. Saute the sliced ​​leeks and garlic over medium high heat until leeks wilt, stirring occasionally. Add herbs and fennel stalks. The fennel adds a little sweetness. Add the red wine and 2 cups water. Reduce heat to very low and allow to cook down while you prepare the tomatoes. Taste for seasoning. 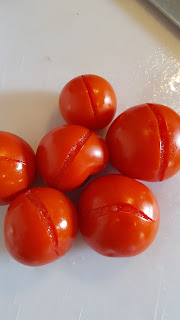 Bring enough salted water to boil and drop in tomatoes. Boil vigorously until the skins pop. Remove carefully with tongs. Cool. Rub off skins. Remove the hard stem area. Make sure you catch all their juices. Cut tomatoes into chunks and add to the ragout sauce. Keep an eye on the ragout so it does not boil off. Add water (stock) as needed. Now add the browned rabbit. Cover. Cook on low heat for 2 1/2 to 3 hours until the meat flakes off the bones. Check every half hour to make sure you have enough liquid. Cool. Refrigerate overnight. Next day, bring up to temperature on very low heat. Remove from heat and take all the meat off the bone. This is a lot of work and you may need a glass of wine. This is what I had--Il Pozzo, a beautiful, rich sangiovese from the D'Orcia region here in Tuscany. This is also what the rabbit had. Lucky rabbit! 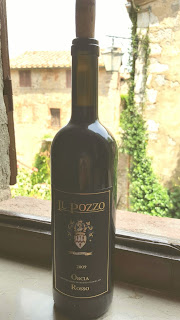 So far, most of the wines I've tasted are very local, all related to the Val D'Orcia region. And so far, all fabulous!
Rabbit bones are tiny and it's much more pleasant to eat without having to deal with bones. The best way to remove the meat from the bones is with your fingers, scraping every little bit off the bones. Because you are using your hands you can feel the bones and are able to remove tiny pieces so they do not end up in your sauce. Remove the fennel stalks. Check sauce for seasoning. I served the Rabbit Ragout over fresh, locally made pasta tipico; pasta made with no eggs; just water and farina, and topped with freshly grated local parmesan. 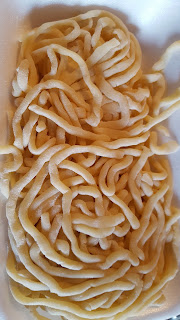 This pasta was light, but also chewy and the perfect foil for my ragout! 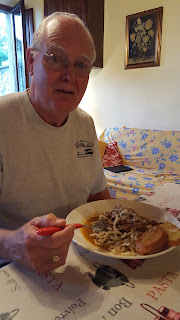 ALL FOR TODAY FROM TUSCANY ...

THIS HAPPENS TO BE MY BIRTHDAY AND AM PLEASED TO SAY IT'S BEEN ONE OF MY BEST!

DREAMED FOR MANY YEARS OF BEING IN TUSCANY ON MY BIRTHDAY AND FINALLY HERE I AM!

HERE ARE A COUPLE MORE SHOTS FROM
Castiglione d'Orcia!

PLEASE TUNE IN AGAIN SOON FOR ANOTHER EPISODE OF CINDY COOKING IN TUSCANY! 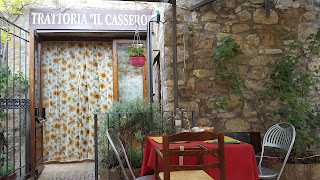 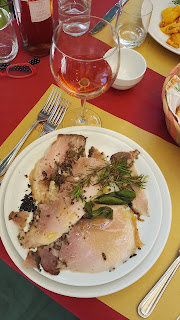 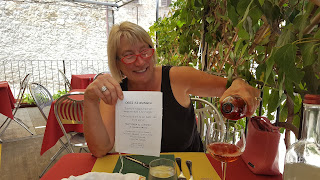 Life is too short to eat badly and drink worse. 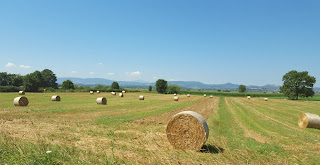 Baled hay as far as your eyes can see.